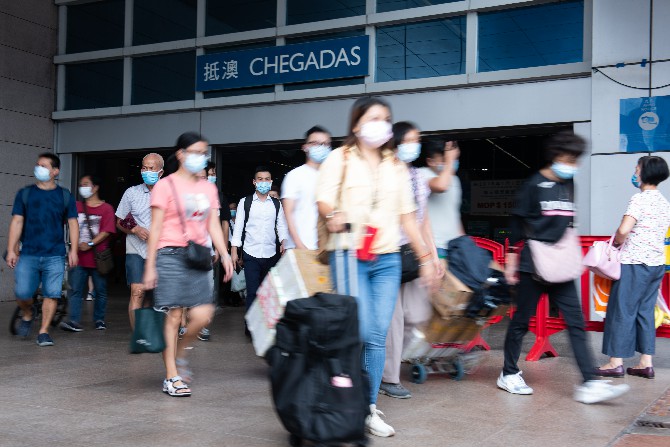 The number of cross-border travelers during the Easter holiday and the Ching Ming Festival amounted to over 291,000 as of 9 p.m. yesterday, according to the Public Security Police Force. The figures show the number of cross border movements since the Easter holiday which kicked off on Friday, April 2.
The Ching Ming Festival was held on April 4.
Macau residents amounted to 141,000 of the total number recorded.
Yesterday, there were a total of 33,000 cross-border travelers, 16,000 of which were inbound tourists.
Recently, the Macao Government Tourism Office (MGTO) launched a new promotion to encourage mainland tourists from non-Guangdong cities to visit Macau using the high-speed rail network. MGTO director Maria Helena de Senna Fernandes announced the promotion in Hangzhou to trade representatives at a seminar focused on tourism in Macau, which was part of the “Macao Week in Hangzhou” roadshow held on March 26 to 29.
The mainland cities along the high-speed rail line within the GBA have been identified as regional priorities for MGTO this year.
In February, tourist arrivals in the city dropped to 427,122, registering a decline of 23.3% month-to-month. The figure, however, represented an uplift of 173.1% year-on-year, which was from when the Covid-19 pandemic began to spread to the city in February last year.
Data for March has yet to be published.

NAT testing quota increased
The Health Bureau has increased nucleic acid tests (NAT) appointments to 37,000 slots due to demand during the Easter holiday and the Ching Ming Festival on April 5.
According to the statement, the demand for such appointments has increased from between 10,000 and 13,000 appointments a day to between 26,000 and 28,000 per day.
“In order to respond to this demand and meet the needs of residents who cross the border daily or are going to travel, the SSM evaluated with the different institutions the possibility of increasing the number of tests by an additional 10,000 vacancies per day,” SSM said in a statement.