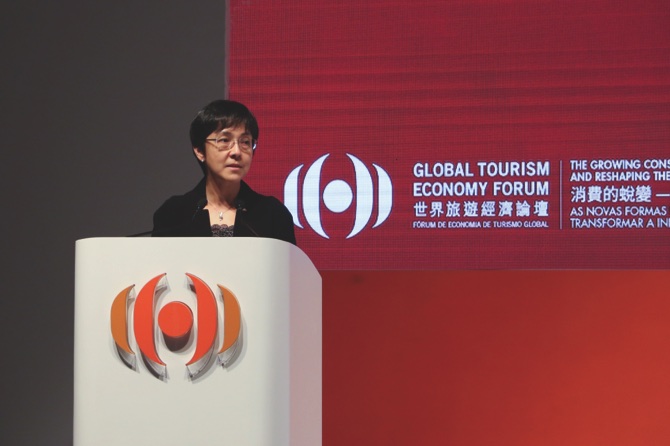 The 2016 Global Tourism Economy Forum (GTEF), which was held over the weekend and brought   a large number of worldwide experts in the tourism field to the region, concluded yesterday evening after two intense days of discussions. The main topic of these discussions was the “Growing Consumer Class” and how this class is reshaping the tourism landscape.
During the final remarks, the vice chairman and secretary-general of GTEF, Pansy Ho, highlighted China’s Premier Li Keqiang’s belief that Macau is a region gifted with attractions and capable of becoming a world tourism and leisure center.
“GTEF has embarked on a wonderful journey of making friends and allies through creating synergies and common objectives in sharing and nurturing an invaluable platform via tourism economy to continue pursuing positive and sustainable economic growth and social harmony among nations,” said Ho, adding: “This forum is a strong bridge between Asia and Europe today and will continue to create a much needed bridged between the East and the West.”
Ho also remarked that focus on consumers is always a logical topic as they are the most important component in tourism development. This GTEF shared the view that tourism is not seen as a luxury anymore but as a natural need worldwide. The forum also noted a series of connections between tourism and all other industries, as well as some strategic points in which those other industries can benefit from .
Also remarking on the results achieved by the forum, Maria Helena de Senna Fernandes, director of the Macao Government Tourism Office (MGTO) and Vice Chairman of the GTEF, said “in these two days, the forum has outlined the latest prospect for the global tourism industry and the ‘new normal’ in the tourism economy from a broad vision and advanced angle, inspiring key decision-makers in the industry.” She added that “smart tourism will be transformed into a new dynamic for regional cooperation across the globe.”
On the importance of GTEF for the region, the MGTO head remarked on how the industry is one of the region’s “pillars” as well as highlighting the strategic position of Macau in this context as well as its status.
“By hosting the forum, we not only demonstrate Macau’s strategic position in promoting multicultural and international interchanges but also embrace a great opportunity to raise Macau’s international profile,” Senna Fernandes said.
During the closing ceremony of the event, the Central and Eastern Europeans countries were mentioned as the new partner countries for GTEF’s 2017 edition. Gusztav Bienerth, government commissioner for Tourism of Hungary, briefly presented the latest tourism development update on these countries, anticipating some of the topics and discussions expected in next year’s edition.

Speaking during the press conference that kicked off the froum, Helena de Senna Fernandes rejected the claims of discrimination against Indian and Iranian visitors as the Times previously reported.
“I can say it’s not an issue of discrimination. Perhaps they [police officers] have access to some information we are unaware of, which can raise some security concerns. Of course we must continue to talk to our police authorities to prevent any unpleasant situations,” the MGTO head said.
Several cases recently reported indicated that many Indian tourists and even Miss Iran had troubles to enter the territory although the into force visa-free policy for such visitors.
Tourists holding passports from several countries have reportedly been asked to show proof of hotel reservations, return flight tickets and at least MOP5,000 in cash.