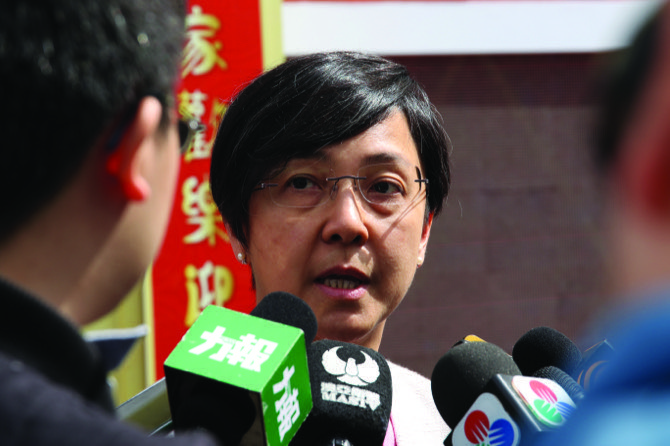 The attractiveness of the Hong Kong- Zhuhai-Macau Bridge (HKZMB) as a “novelty” should last about six months, the director of the Macao Government Tourism Office (MGTO), Helena de Senna Fernandes, forecasted yesterday at the Parade for Celebration of the Year of the Pig.

According to  Fernandes, “We are still at a stage where people have a lot of interest in the novelty of the bridge [HKZMB] and that is why we can forecast a growth [on visitor figures] higher than in previous years.”

The head of MGTO had previously predicted that during this year’s Lunar New Year week-long celebrations, Macau should expect to receive an increase in the number of visitors of about 8 to 9 percent in comparison with 2018. According to Fernandes, the increase in visitors is partly due to the bridge.

“In previous years, we forecasted around 3 to 5 percent growth, so this year our forecast is much higher than in previous years,” she said noting that in order to forecast such figures, MGTO is using the most recent figures of visitors’ arrivals from the last two months of 2018, after the bridge began its operations.

Fernandes also expects that when the limitations on the number and type of vehicles travelling on the bridge is eased, the structure can represent an even more significant point of entry and exit to the region, although still falling short of the figures achieved by the Border Gate.

To recall, Fernandes had presented the 2018 tourism data and had noted the importance of the HKZMB, stating that since its opening, the bridge had immediately become the second largest port of entry after the Border Gate checkpoint.

Not giving any timeline for when such restrictions could be eased, she added that MGTO hopes there will be some, “especially in what concerns the connections to [Hong Kong] airport,” adding that “this would ease both the incoming tourists and residents who wish to travel abroad [and above all] would be important for the conventions and exhibitions sector, as this is always a concern for people when choosing a place [to hold such events].”

Fernandes addressed the additional measures that will be enforced by the authorities to accommodate the increase in visitors, particularly those falling under MGTO’s responsibility, noting, “This year we are testing a new measure under the initiatives of ‘Smart Tourism.’ It will be the first time we are testing this system, which might need some adjustments.” The system aims to use big data to analyze, in real time, the number of visitors in several locations of the city and forecast possible crowd control measure enforcement.

As for other measures, she said, “we will continue to send SMS [warning] messages to the mobile phones of the people located in the surroundings of the more crowded areas to advise those tourists not to go to areas that are overcrowded. This [system] has already been tested in October [last year, during the National Holidays],” Fernandes said.

“Previously we used to send SMS messages to all mobile phones using the roaming network in Macau, but we think that was not the ideal way because some people may receive the message in Taipa [and the issue did not apply to them]. Because of that, from October, we did the adjustments in order to send the SMS only to the people in a certain area and at a certain time. We think this brought good results and this is also a way not to bother the visitors to which the message would not apply.”

Concluding on the measures enforced by MGTO, she recalled  the placing of information points and staff in strategic locations of the city, as seen in previous occasions.

“We have people in 10 [different] locations, chosen by the fact of being points frequently crossed by tourists before entering the most crowded areas, so we can advise them ‘in loco’ about alternative places to visit or alternative routes,” said Fernandes.