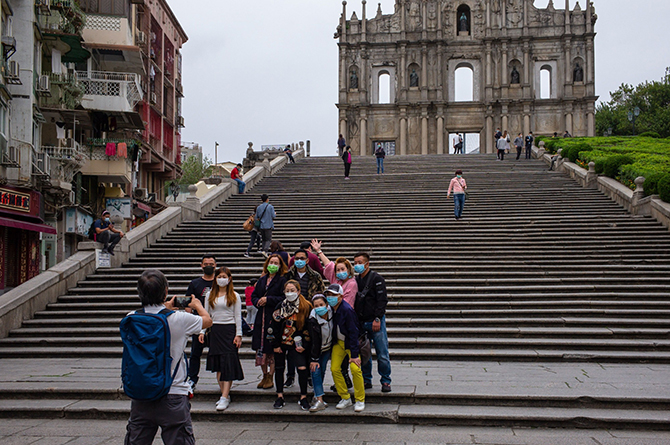 The Macao Government Tourism Office (MGTO) is anticipating a the highest tally of tourist arrivals to Macau since the pandemic in the coming May Golden Week Holiday (also known as the May Day Holiday), Cheng Wai Tong, MGTO sub-director, revealed yesterday.
“We are expecting that, after considering the accommodation booking volumes, which also reached the highest figures [since the pandemic] for the holiday,” Cheng said on the sidelines of an event yesterday.
After examining the booking data provided by local accommodation venues, the MGTO is expecting the city’s overall hotel occupancy rate to hit 70-80% during the May Golden Week.
The MGTO will continue to step up promotion efforts via mainland media platforms to encourage visits from mainland cities.
On April 16, Macau saw the highest daily record of visitor arrivals since the start of the pandemic, at 34,252.
From April 9 to 15, the city’s occupancy rate averaged around 61.0%, up 12.7% from 48.3% at the Spring Festival Golden Week.

Increased quota mulled for helicopter tour
Cheng revealed that the authorities are now considering increasing the quota for the highly sought-after helicopter tour.
The MGTO is set to liaise with the flight provider to discuss the possibilities of extending the weekly flight frequency to accommodate the 15,552 people who have applied so far: a number that far exceeds the present quota of 1,512 seats.
Meanwhile, around 800 staycation packages have been sold under the “Stay, Dine and See Macao” domestic travel scheme.