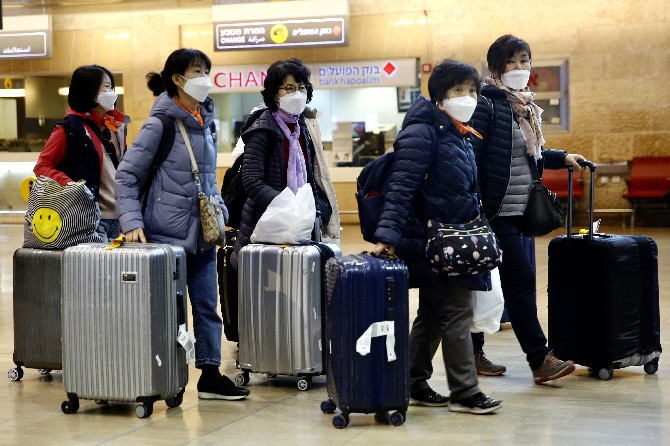 If they don’t speak out, we have no way to know where these Macau residents are,” Inês Chan, Chief of the Macao Government Tourism Office’s (MGTO) Department of Licensing and Supervision, told the daily press briefing yesterday organized by the Novel Coronavirus Response and Coordination Center. The question came in response to whether the Office would proactively contact local residents travelling abroad.
The growth of confirmed cases in South Korea has surged for two consecutive days and now stands above 800. This increase prompted the Center to declare the East Asian country on the list of severely infected areas.
In Europe, the situation in Italy escalated substantially with an increase of 147 cases over the past weekend. At the same time, Japan’s situation is intensifying with a suspected community outbreak emerging. Flights connecting these places to Hong Kong are still in operation and Macau residents can reach these places via Hong Kong or other transit points.
As such, the tourism regulator was asked if it will issue travel warnings to these three countries with regard to the Covid-19 outbreak. It said that there is no plan to do so. However, it stressed that Koreans entering Macau are required to undergo medical checks.
While flights between Macau and South Korea have been canceled entirely until March 1, people who have been to the country in the past 14 days will also be required to undergo medical checks.
The MGTO has been responsive by offering help to Macau residents travelling abroad. When asked if the authority will act more proactively in this respect, Chan insisted it was the responsibility of travelers to contact the office for help.
Chan said that under normal circumstances neither the tourism authority nor the other branches of the government have any idea where Macau residents are when they are out of the city. According to the official, Macau residents have no duty to declare or announce their itinerary or travel destinations to the government.
Passengers are, however, required to produce identification documents when they board a flight, regardless of whether it is domestic or international.
Chan said people in need should contact the authority proactively. “If people in other places [outside of Macau] are in need of help, we invite them to call our Tourism Crisis Hotline to tell us where and how they are,” Chan said.
Yesterday, some Koreans were still en-route to Macau. The Public Security Police Force disclosed that as of 2 p.m. yesterday, 12 Korean tourists tried to enter the city. Eight of them were delivered to the medical station at the Taipa Ferry Terminal for inspection.
One of them refused to undergo a medical check and chose to return to Mainland China, from where they entered Macau. The other three managed to prove that they have not been in their home country in the past 14 days, so they were allowed entry without medical checks.
As Macau enters its 20th day without a new infection in the city, yesterday the government of neighboring Guangdong Province lowered the Emergency Level, one level down from its top-tier.
Nonetheless, the Macau government has no plan yet to relax its measures against the epidemic, although several suspension measures have been lifted. The center maintained its position that people must remain vigilant and should not gather in large groups. Measures such as health declaration and school suspension are still in place.
The center also disclosed that four Macau residents managed to return from Wuhan by land transport. They are now in quarantine in Zhuhai.
Yesterday, media outlets reported that the Wuhan government has eased the lockdown of the city. However, in the afternoon, the mainland city’s government issued a statement to announce that the previous notice was premature.
On the sidelines of the press conference, the Gaming Inspection and Coordination Bureau notified the center that four more casinos resumed operation yesterday: the Waldo, the President, Altira and the Grand Dragon. This increases the number of casinos operating to 33, leaving eight still closed.