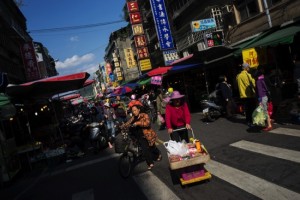 According to Taiwan’s Tourism Bureau, tourist arrivals in the island are expected to surpass 10 million for the year 2015. This figure will be the highest number of arrivals in the history of the island-state, and will realize a target narrowly missed in 2014, when the bureau recorded 9.91 million visitors.
The news of the approaching milestone comes as visitor arrivals in Taiwan are up 4.67 percent for the first 10 months of 2015, compared with the same period in the previous year.
For the January–October period, around 8.47 million overseas tourists arrived in Taiwan, of which more than 40 percent were from mainland China (3.5 million). The number is expected to climb to 4 million in December.
By the end of the year, tourists from Hong Kong and Macau alone are expected to exceed 1.3 million, while the number from Japan is likely to reach 1.5 million.
The bureau estimates that the 10-millionth visitor will arrive on either December 15 or 16.
However, the Tourism Bureau cautioned that while visitor numbers have risen, overall spending may stagnate due to the depreciating value of the Taiwan dollar against its US counterpart.
Tourist contributions to the Taiwanese economy are expected to amount to USD13.62 billion for 2015, according to Central News Agency citing the bureau, marking a significant drop from the figure of USD14.6 billion recorded in 2014.
In addition, the bureau said that a shorter average length of stay and a greater use of independent travel budget could also account for the recession in tourist spending.
Meanwhile, outbound travelers from Taiwan are expected to exceed 13 million by the end of 2015, due to the increasing popularity of overseas travel, and the impact of the decline in value of the Japanese Yen.