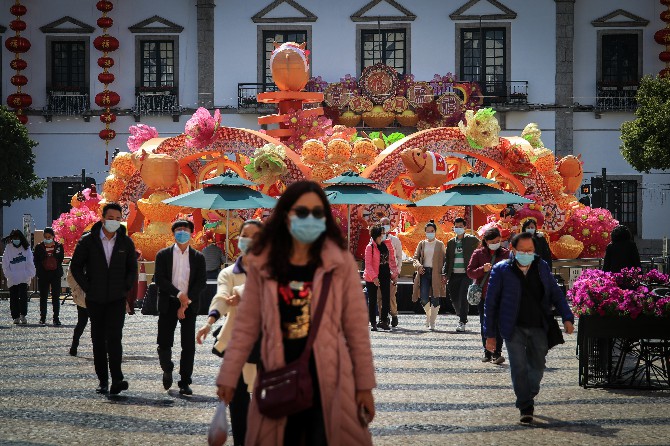 The number of December tourist arrivals grew 3.6% month-to-month to 659,407, however this data still represents a year-on-year decline of 78.6%, the Statistics and Census Service said in a statement yesterday.
According to its data, the number of visitor arrivals stood at more than 5.89 million in 2020, a decline of 85% year-on-year. This was slightly less than the figures in the data recently published by the Public Security Force.
Covid-19 has brought global tourism to a standstill, crippling the economy of the SAR due to its heavy reliance upon the sector.
Meanwhile, according to the official data, the 2020 arrivals’ length of stay rose slightly by 0.3 days year-on-year to 1.5 days, while the duration for overnight visitors rose by 0.3 days to 2.5 days.
There were 390,300 overnight and 269,107 same-day visitors in total.
Mainland China has been the city’s main source of visitors after the government announced its entry ban on tourist arrivals from outside Greater China.
However, the city still recorded an 83% year-on-year decrease last year in mainland tourist numbers to 4,754,239 – the majority of which came prior to the pandemic.
Meanwhile, in December, the number of mainland visitors fell by 71% year-on-year to 606,884, 261,297 of whom travelled under the Individual Visit Scheme (IVS).
This decrease was also mainly attributed to the Covid-19 restrictions put forth by both the SAR and the central government.
As of now, the central government is still not issuing group visas to its citizens despite calls from the city’s tourism authorities. However, local officials note that this request is still under negotiation.
Despite the group visas not being issued, Macau’s number-one source market has gradually been able to apply for IVS since the SAR opened its borders in August to these residents in a bid to recuperate tourist arrivals.
Further, December visitors from the nine Pearl River Delta cities in the Greater Bay Area totalled 327,611, 138,773 (42.4% of the total) of whom came from Zhuhai. Meanwhile, there were 46,786 visitors from Hong Kong and 5,685 from Taiwan.