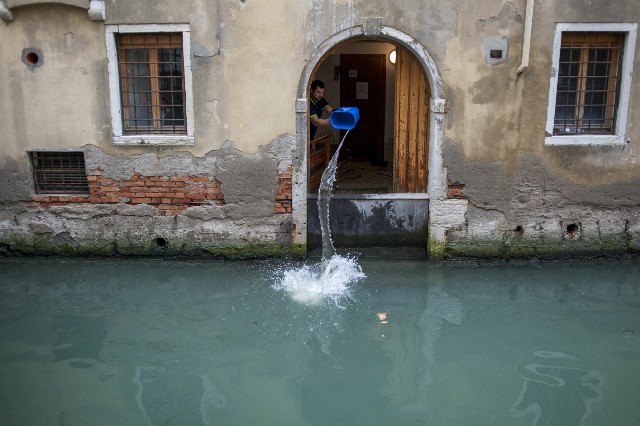 Two weeks after high tides and fierce winds produced the worst flooding in Venice in more than half a century, sirens sound about 6:30 a.m. to warn the fragile lagoon city’s weary residents that “acqua alta” is arriving again.
Less than two hours later, temporary wooden platforms are in place to allow pedestrians to move through ancient cobble-stone streets. Vendors hawking cheap water-proof boots appear out of nowhere to cater to ill-prepared tourists.
Sergio Boldrin, one of Venice’s most renowned mask makers, is used to the ritual. But the floods aren’t the only sign of decay. The feeling in the city is that climate change is hastening a downfall that started with mass tourism.
“The city has become ugly. It’s lost its soul,” said Boldrin, as thrifty day trippers stream by to gawk at but not buy his masks, which can cost as much as 1,000 euros ($1,100). “These people just don’t recognize its real beauty.”
The son of a gondolier, Boldrin is a living embodiment of Venetian tradition. From the stool of his tiny atelier Bottega dei Mascareri near the famous Rialto Bridge, the 62-year-old sees a string of small canvas-covered stands selling cheap trinkets, including low-grade plastic and ceramic knockoffs of his masks for as little as 10 euros.
The city—improbably spread across more than 100 small islands in the Venetian lagoon—attracted an estimated 30 million visitors this year. The crowds strain resources but provide little value for the local economy. Three-quarters of the tourists stay for just a few hours and spend an average 13 euros on souvenirs, according to research by Confartigianato Venezia, an association of local trade businesses.
Artisans are struggling to compete with the influx of cheaper products made abroad, and many can’t afford rents that have been driven up by real-estate speculation. Skilled craftspeople in the city’s historical area have dropped by half since the 1970s to about 1,100 in 2018. 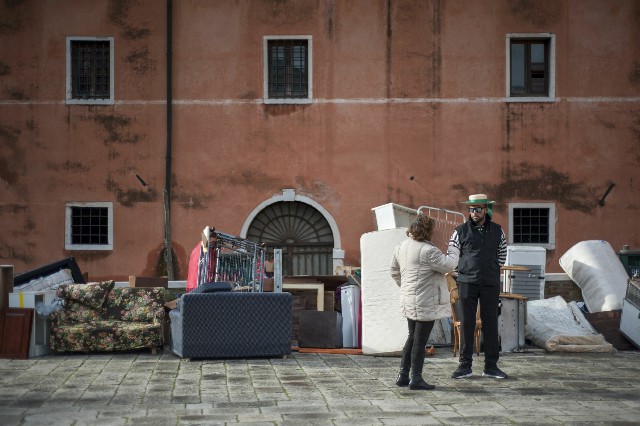 “A lot of it is generational change,” said Enrico Vettore of Confartigianato Venezia. “Often there’s no one in a family who can take over the business,” but there’s also the lack of demand as day trippers “don’t buy real artisan products.”
On the nearby island of Murano, Luciano Gambaro is waging a battle to preserve centuries of local glass-making traditions. The number of people working to produce the colorful, hand-blown vases and figurines has also halved, partly due to the impact of counterfeit products from eastern Europe, China and India, says the 54-year-old, who runs the family’s company and heads a consortium of business that promotes Murano glass.
The floods, which have become more frequent, disrupt the city’s rhythm, suspending Vaporetto boat lines that connect stops on the Grand Canal to outlying sites like Murano, Burano and the barrier island of Lido.
Just before midnight on Nov. 12, Venice’s “acqua alta” reached 184 centimeters (6 feet) above sea level. It was generated by a combination of rising tides and powerful winds of more than 75 miles per hour. City officials estimated the damage at about 1 billion euros. Like many others, Mayor Luigi Brugnaro blamed climate change.
“I love my town, we’ve raised four children here, but the city has changed for the worse in the last five years,” said Giovanni Giol, president of the Benedetto Marcello music conservatory.
Housed in a palace built in the early 1600s, manuscripts and books in the library were soaked in this month’s historic flood. The worst affected items were sent to a restoration facility in Bologna, while others were carried to higher levels of the building and are drying out on floors of the museum alongside 17th century musical instruments.
“The storm brought home the reality of the situation,” said Jane Da Mosto, executive director of a non-profit organization trying to reverse the community’s decline by controlling tourism, including a ban on cruise ships. “Venice is close to falling off the precipice. There’s no control room.”
About 1,000 residents leave every year, and about 50,000 people now call the lagoon home. The former city-state has been governed together with its larger mainland neighbor Mestre since they were linked in 1926 by Fascist leader Benito Mussolini.
Activists like Da Mosto say the city’s issues are so unique that it needs to be separate. On Sunday, Venetians will vote on a referendum to give the community its own administrative structure, but it’s non-binding and opposed by the mayor, who has called the effort “folly” because it risks creating bureaucratic bottlenecks and discouraging investment.
That puts more focus on the fraught MOSE anti-flooding project. Embroiled in several corruption probes, the system of water gates is way over budget at 5.5 billion euros and counting, and won’t be ready until 2022—more than two decades after construction began.
And it will likely be useless in stopping rising tides, according to Nelli-Elena Vanzan Marchini, an Italian historian who has written several books on Venice.
Global warming has raised sea levels about 8 inches since 1880, according to Climate Central, an independent organization of scientists and journalists. The rate is accelerating and a recent report by the group predicted that high-tide lines could permanently rise above land occupied by around 150 million people by 2050, including 30 million Chinese.
That’s a bleak outlook for residents like Boldrin. Along with creating masks, the artist paints images that evoke the “Death of Venice” theme—dark, solitary figures crushed by the weight of the city’s decline.
“Many of us Venetians are tired,” he said in the studio he founded with his brother in 1984 and hopes to pass on to his daughter. “Venice is suffocating.” Bloomberg 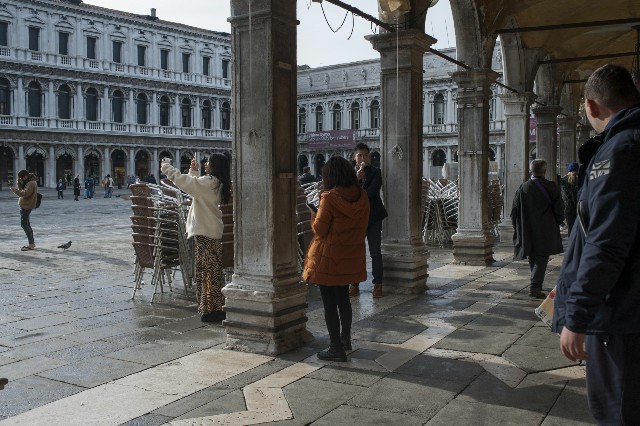