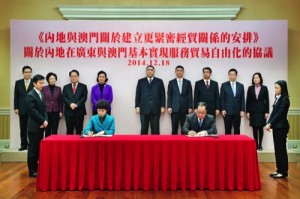 More service sectors in the Guangdong market are set to be opened up to Macau’s service providers from next March, following a new trade liberalization agreement signed yesterday between the MSAR and China’s Ministry of Commerce. Based on the Closer Economic Partnership Arrangement (CEPA) signed between MASR and the mainland in 2003, the “Agreement between the Mainland and Macau on Achieving Basic Liberalization of Trade in Services in Guangdong” offers further and broader preferential access for Macau’s service products, companies and small private business to the mainland market.
“The agreement allows Guangdong to open up a total of 153 service trade sectors to Macau, accounting for 95.6 percent of all 160 service trade sub-sectors under the World Trade Organization (WTO) standard,” vice minister of Commerce Ms Gao Yan stated after the signing ceremony.
More barriers are set to be removed for Macau’s service suppliers to extend across the border. Hence, the cross-border free trade deal list is extended to 130 service sectors now with 24 new liberalization measures, thus opening up 84 more sectors for small private businesses to operate within. Meanwhile, the authorities negatively listed 134 sectors and maintained existing restrictions in 132 sectors.
The agreement also states that any CEPA-plus preferential treatments offered by the mainland to other countries and regions will be extended to the Macau SAR, so as to ensure it enjoys the most preferential liberalization measures offered by the mainland.
To be implemented from March 1, the agreement is regarded as a pilot scheme. According to the vice minister, Guangdong will set a model for other mainland provinces to liberalize the service trade with Macau.
“We’ll take reference from Guangdong’s first implementation of the Agreement, so that the same goal of basic liberalization can be achieved nationwide by the end of next year,” she declared.
Ms Gao also stated that related laws and administrative regulations will be modified in order to ensure the agreement will be implemented on schedule.  “We hope Macau’s service sectors can take fully advantage of the policy space provided by CEPA, and seize the opportunity as Guangdong is taking the lead in mainland China for basic liberalization of service trade,” she said.