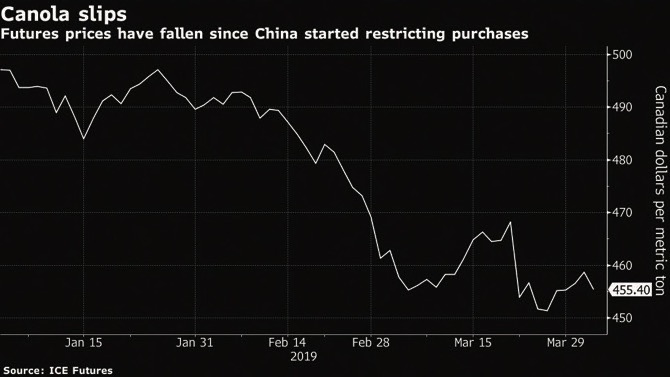 After getting China hooked on canola, Canadian growers of the oilseed are reeling from the Asian giant’s decision to cut imports. They’re standing pat, though, on their production plans.

Canola is as Canadian as maple syrup, its name a contraction of “Canada” and “ola.” University of Manitoba and government researchers created the crop in 1974, reducing certain acid levels in the inelegantly-named rapeseed plant to make the oil edible for humans and the meal edible for animals.

Since then, canola has become a staple in Chinese kitchens and feed lots, generating about CAD26.7 billion a year for Canada. Last month, the Asian nation cut imports, blaming pests found in Canadian shipments. Now farmers face a tough call: Plant the same amount, or cut back.

“We don’t feel that at this point we will switch any of our crop intentions,” said Clinton Monchuk, a farmer near Lanigan, Saskatchewan, by telephone. He’s got his seeds, and has “80 to 95 percent” of his crop planned out, he said.

Farmers don’t want to disrupt their crop rotation schedules because of concern about how it might affect nutrients in the soil. At the same time, there really is no crop that they could switch to right now that would give them any more money or have better marketing options than canola, which is also sold to other export markets.

Pulse markets are down because India has import tariffs in place, durum wheat is facing export problems to Italy, where there is now Country of Origin Labeling laws in place that nudge consumers away from buying Canadian durum made pasta. And the milling wheat market is facing a global glut.

Industry groups and Canadian executives say the restrictions may be less about pests and more about a feud surrounding Huawei Technologies Co. Chief Financial Officer Meng Wanzhou, who was arrested in Canada after a U.S. extradition request. China has demanded her release, and has since detained two Canadians before choking off canola sales.

Some have forecast that Canadian canola acreage will drop this year. Richardson International Chief Executive Officer Curt Vossen, for instance, said he expects acreage to fall by 5 to 15 percent during government committee meetings on April 2.

But even though seed isn’t in the ground yet, many farmers have said they won’t be switching away from canola. Monchuk said he’ll plant about 1,000 acres with canola, accounting for around 25 to 35 percent of his acreage.

Jeff Bennett, a grower near Dodsland, Saskatchewan, said he’ll seed about a third of his fields with canola, accounting for 1,500 acres. He operates a three-crop rotation.

Since rumors circulated in January that China would slow purchases, the May canola contract in New York has dropped 8 percent to CAD455.40 per metric ton on April 3.

Bennett had most of his canola sold before China started restricting purchases of the oilseed but he is still finding the situation frustrating. Monchuk on the other hand still has a little left to sell from last year.

The council’s first priority, though, is working with the government to re-establish the Chinese market, Everson said.

“Is there some swing capacity in certain markets today? Yes there is,” said Kyle Jeworski, the chief executive officer at Viterra, which processes and markets crops, during an April 2 government meeting. Overall, though, “it requires a lot of foresight and planning to be able to actually talk about diversification,” Jeworski said. Ashley Robinson, Bloomberg