Trade dispute | High-level talks with US to resume next week 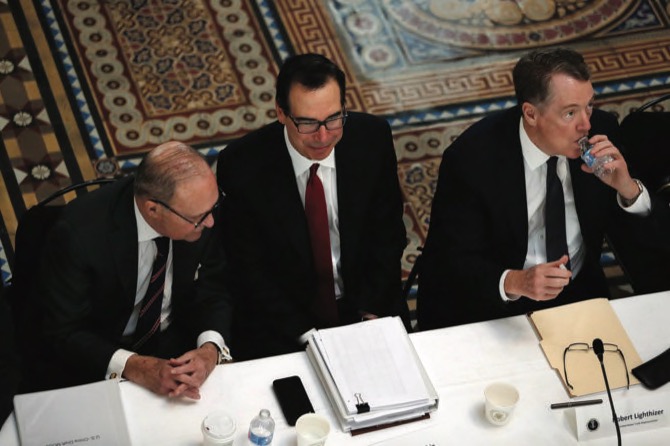 Top U.S. trade and economic officials will visit China late next week for another round of negotiations, a White House official said yesterday [local time].

The scheduled talks suggest the two sides believe they can make at least some progress. President Trump said last week at the White House that, “Talks with China are going very well.”

But the negotiations are also taking place in late March, a period when administration officials had previously hoped to sign an agreement at Mar-a-Lago, the president’s Florida resort. Business lobbyists say an agreement now probably won’t be reached until late April.

“I would say perhaps the month of April,” Larry Kudlow, the top White House economic adviser, said on C-Span Friday. “It’s not in cement.”

The trade dispute began last year after the U.S. listed a number of complaints, including that China engaged in outright theft of U.S. trade secrets and forced companies to transfer technology in exchange for access to its market. Trump imposed tariffs on USD250 billion of Chinese imports, about half what the United States buys from that country. China retaliated with tariffs on about $110 billion of U.S. items.

Administration officials say they speak with their Chinese counterparts on a nearly daily basis. Business lobbyists say that a key sticking point is what type of enforcement mechanism will be included in the agreement. The Trump administration, they say, wants to have the option to impose tariffs on Chinese goods if China doesn’t abide by the terms of the pact. The U.S. also wants China to promise not to retaliate against those tariffs.

“We are cautiously optimistic that the two sides are going to get there,” said Jeremie Waterman, president of the U.S. Chamber China Center. “They’re clearly whittling the number of outstanding issues down.”

A report released Friday estimated that the trade war will likely damage the U.S. economy. Analysts at the Rhodium Group, in conjunction with the U.S. Chamber of Commerce, estimated that the tariffs, if they remained in place, could cost the United States a cumulative $1 trillion in economic output over the next decade.

Even if the tariffs are soon lifted, the report estimates that they will shave $50 billion, or 0.3 percent, off this year’s economic output.

The duties would also not bring back production of information technology hardware to the United States, the report found. Christopher Rugaber, Washington, AP