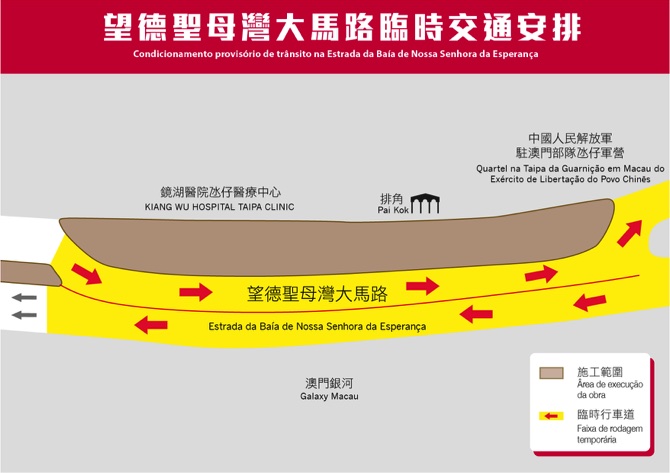 Traffic will be temporarily controlled in Taipa tomorrow on a section of the Estrada da Baía de Nossa Senhora da Esperança in the surrounding area of Galaxy Macau, the Transport Bureau (DSAT) and the Transportation Infrastructure Office (GIT) informed in a joint statement. The control system that will be in place between 8 a.m. to 8 p.m. is related to the construction of the pedestrian overpass structure for the LRT “Pai Kok” station. During the period, all traffic will flow into split lanes when travelling into the direction that leads to Sai Van Bridge.

An 11-year-old girl from Saudi Arabia has undergone tests at the public hospital (CHCSJ) due to reportedly having presented symptoms resembling those of the Middle East Respiratory Syndrome (MERS), the Health Bureau (SSM) informed in a statement. According to the statement, the child showed signs of abdominal pain and a fever, which led her parents to seek medical help at Kiang Wu Hospital Clinic in Taipa. She was later transported to the CHCSJ to be submitted to tests for MERS. The test results were negative, SSM announced late last night.