TRAVEL | A graphic designer dedicates her life to exploring the Poles 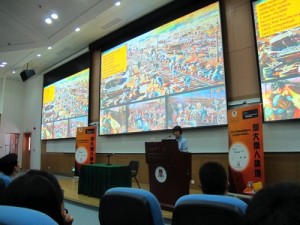 Rebecca Lee’s entire professional life could have been focused on designing Cathay Pacific’s inflight magazine or pursuing the old tradition of Chinese painting.  However, an urge to explore the unknown and unveil life in harsh conditions has led her to engage in exploratory missions to the North and South Pole, as well as to Mount Everest.
Giving a lecture to students at the University of Macau this week, Rebecca Lee talked of a journey with no regrets, blazing a trail for nature lovers to follow.
She first fell in love with art. But life as a painter had its hurdles, she recalled, saying that studying commercial design appeared to be a good compromise.
With a successful career as a designer, Rebecca Lee went on to design logos for the government, Hong Kong’s Jockey Club, and electricity companies, ultimately designing Cathay Pacific’s inflight magazine.
Her professional path, however, would soon serve a very specific purpose: Rebecca Lee wanted to earn enough money to later dedicate herself to what would be her ultimate mission in life.
The protection of the polar regions would become her true commitment. “When China set its first station in Antarctica, I was asked to design an exhibition. It was a good opportunity for me, so I said I’d love to do it (…) [later] I thought to myself: could I go in one of these expeditions?” she told us.
In 1985, Rebecca Lee first visited the South Pole on a mission to help promote mainland China’s station. “The government allowed me to join the expedition team, and that’s how I started following in the footsteps of scientists, taking pictures and notes.”
As the years passed, she realized the importance of protecting and working on the preservation of the Polar Regions. “I have no regrets,” she assured.
Encouraging students “not to miss one minute of their lives,” Rebecca Lee, who is the founder of the China Polar Museum Foundation, suggested that we should plan our lives carefully.
She spent her first 20 years earning enough money, which later allowed her to stop working.  In her next 20 years, Rebecca backpacked across the globe to explore different cultures while testing her physical strength. Soon after, she would embark on a lifetime journey that led her to the Arctic ten times, to Antarctica eight times, and to the Mount Everest region four times.
In her early expeditions, Antarctica was known as a man’s world. She was dubbed “Miss Hong Kong.” “They were expecting a blond with curly hair and jewelry. Well, they were disappointed,” she laughed.
China has been able to build up very modern bases in the Poles. Back then, however, hurdles were far greater.  These challenges included having to eat as quickly as possible so that the food would not freeze; enduring minus 58 degree Celsius weather; following missions to drill ice and bringing back samples to Shanghai and witnessing how climate change is affecting polar regions.
“It was hard, but meaningful,” she recalled, while recognizing that many team members came back marked for life.
Joining several expeditions, Rebecca Lee was fortunate enough to help scientists evaluate and document climate change effects in both the Arctic and Antarctica. “Pollution in the Poles is severe (…) in the future, climate change is due to have serious impact on agriculture. As we keep developing our industries, we will continue to face pollution problems, and pollution will reach the ends of the earth,” she stressed.
From filming the ice melting in Antarctica to photographing and documenting hunting expeditions of Arctic’s Eskimos, Rebecca Lee has gathered valuable materials, which she used to publish over ten books and to hold exhibitions.
She now devotes her days to educating young students on environmental protection, giving lectures in Hong Kong, Macau, and mainland China.
Defending her true love for our planet and mankind, Rebecca urged both students and their parents to pursue what they most treasure in life. “If [young people] in Macau want to become scientists, they should work hard, study here and study abroad to learn more. When they come back, they can offer their talent here. They can do something,” she said.
Asked by a student if her parents approved of her decision to quit a career in design, Rebecca recalled: “I didn’t need my parents’ support. I had earned a lot of money and did well in school. I was the eldest and my family was supportive of my achievements.”
Rebecca Lee spoke at one of UM’s Distinguished Lecture Series.

Polar researcher Rebecca Lee sees education as a key step to ease environmental pressure triggered by a growing influx of tourists. She believes the government has worked hard, but recognizes “it is not easy to manage so many tourists coming in every day.”
Rebecca Lee confirmed that educating tourists could help tackle environmental problems, since tourists have “a habit of wasting things.”
“I think there’s a need to educate tourists on how to become good travelers. They don’t care, sometimes, they just come here and waste food, as there’s the Chinese way of thinking that if I paid, it’s business, I can waste it. Education is the only way to tackle the problem, since we don’t have enough food, and water,” she recalled.