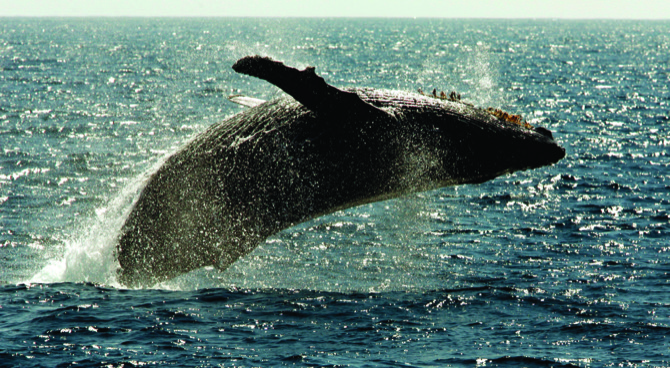 Research into the decline of humpback whale sightings in Hawaii points to a food chain disruption likely caused by warmer ocean temperatures in the whales’ feeding grounds in Alaska, federal officials have said.

U.S. and international researchers, wildlife managers and federal officials were meeting in Honolulu this week to discuss the decline in sightings of humpbacks that traditionally migrate each autumn from Alaska, where they feed during the summer months, to Hawaii, where they mate and give birth during the winter.

Data presented at the meetings shows a strong correlation between warming oceans and the missing whales, said Christine Gabriele, a federal wildlife biologist who monitors humpbacks at Glacier Bay National Park in Alaska.

Three factors have warmed the ocean in Alaska since 2014, the same year scientists noticed a decline in sightings in Hawaii.

There was a change in an ocean current known as the Pacific Decadal Oscillation, a warm El Nino period in 2016, and a massive “blob” of warm water in the region.

The Pacific Decadal Oscillation, a current that switches between cool and warm periods over the course of many years, switched to warm in 2014.

Data shows that “it was more favorable for the whales when we were in a cold period, and then less favorable when the (Pacific Decadal Oscillation) switches to warm,” Gabriele said.

“In Glacier Bay we have definitely seen a much lower calving rate and much lower calf survival as well as juvenile survival,” Gabriele said. “I think there are metabolic issues that are probably related to the production of a calf. We’re not clear if it’s a lack of pregnancy or lack of ability to carry it to term.”

The whales may also be spreading out or moving north to cooler waters to find their prey, which could explain why there are fewer sightings in Hawaii.

Based on the latest large-scale population study, it is estimated that half of all North Pacific humpbacks make the journey to Hawaii each year, putting the total number of whales making the 6,000-mile (9,700-kilometer) round trip migration at around 11,000 annually.

Most humpbacks were taken off the Endangered Species list in 2016 but are still federally protected. Researchers believe that a change in the whales’ food supply in Alaska is behind the decline in sightings in Hawaii.

And while scientists agree that a decline in sightings in both Alaska and Hawaii is because of a change in food, they still don’t know if there is a larger issue that could be impacting the entire habitat.

Officials with the National Oceanic and Atmospheric Administration hope this week’s meetings will help them to form a plan and get funding to help ensure the species’ continued success. NOAA conducts research, creates federal regulations and enforces laws meant to protect the whales.

“At least in Alaska, there’s something happening with the prey,” said Marc Lammers, research coordinator for NOAA’s Hawaiian Islands Humpback Whale National Marine Sanctuary. “What we didn’t really resolve is whether that applies more broadly to a larger area like across the North Pacific.”

The researchers said that while historically there have been dips in sightings on specific islands in Hawaii, those declines were usually accounted for by an increase in sighting somewhere else in the archipelago.

But over the past four years, there has been a downward trend of between 50 percent and 80 percent of sightings across the entire main Hawaiian Islands, something Gabriele called “unprecedented.”

There has also been a decline of nearly 60 percent of sightings in Alaska’s Glacier Bay.

NOAA’s Susan Pultz, chief of conservation planning and rulemaking in the Pacific island region, said the meetings are a starting point for possible future action.

“I don’t think there’s necessarily panic, but I think just the fact that we came together today tells you that there is some sense of urgency about the whales,” Pultz said.