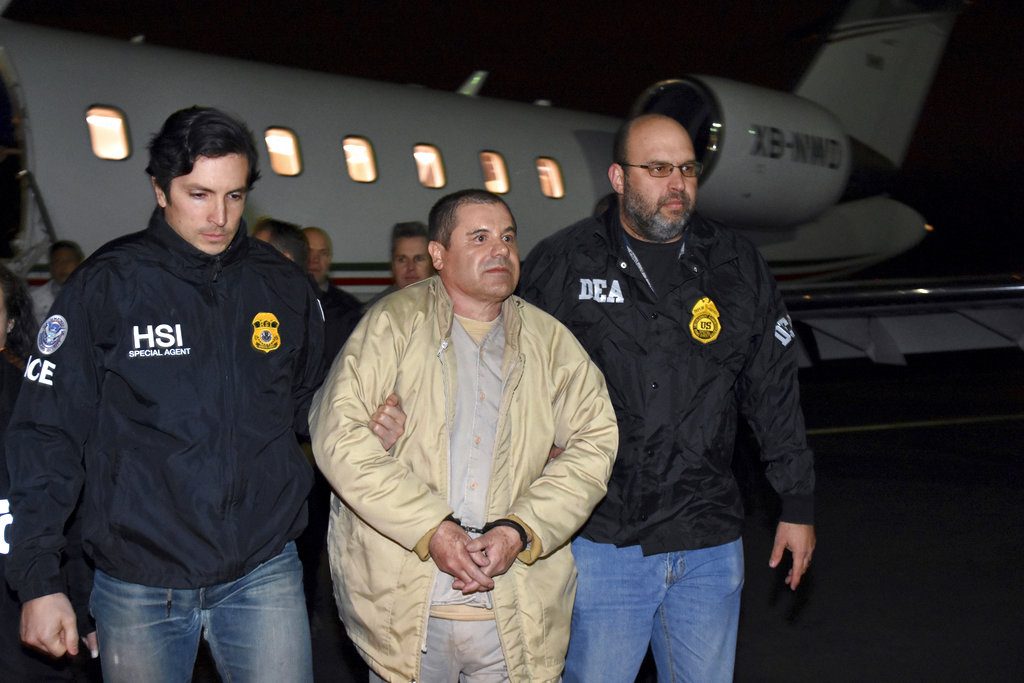 In this Jan 2017 photo, US authorities escort Joaquin “El Chapo” Guzman (center) from a plane to a waiting caravan of SUVs at Long Island MacArthur Airport, in Ronkonkoma, N.Y. (AP File)

Over time, the kingpin who grew up in poverty developed a taste for world travel, he said. His entourage visited Macau to gamble and Switzerland so he could get a “cellular youth treatment,” he said.

“He had houses at every single beach,” said Martinez, formerly a close friend and top assistant. “He had ranches in every single state.”

The good times were spoiled by a bloody turf war with a rival cartel that grew so heated it sent a team of hit men to an airport in Guadalajara to try to take out Guzman, Martinez said.

Martinez described how the Sinaloa cartel was smuggling tons of cocaine into the United States — through tunnels dug under the border, in tanker trucks with secret compartments, even in fake chili pepper cans. What came back in the other direction, he said, was tens of millions of dollars in cash.

Much of it ended up in Tijuana, where Guzman would send his three private jets each month to pick it up, Martinez said. On average, each plane would carry up to USD10 million, he said.

The cartel used stash houses to hide much of the cash, Martinez said. Samsonite suitcases stuffed with U.S. currency also were taken to Mexican banks, where workers were bribed to exchange it for pesos, no questions asked, he said.

Guzman also used his jets to fly around the Mexico with armed bodyguards to visit all his homes, including an Acapulco beach house featuring the zoo with a “little train” used to ride around and see lions, tigers and panthers, he said. There also was a yacht docked there called “Chapito,” he said.

Among his other expenses were “four to five” women in Guzman’s life, Martinez said with the defendant’s wife listening from the gallery. “We had to pay them all,” he said.