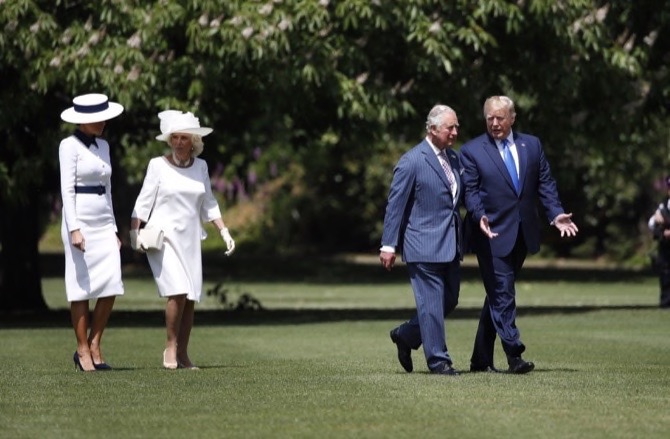 President Donald Trump met with Queen Elizabeth II yesterday during two-day visit to Britain that’s meant to strengthen ties between the two nations, although the trip was immediately at risk of being overshadowed by Brexit turmoil and a political feud with London’s mayor.

Trump and first lady Melania Trump flew to Buckingham Palace in Marine One, landing on a lawn where they were greeted by Prince Charles and his wife Camilla. They received a royal gun salute as they walked to the palace where the queen greeted the president with a smile.

Even before Air Force One touched down north of London, Trump unleashed a Twitter tirade against London Mayor Sadiq Khan, leader of the world city where Trump will stay for two nights while partaking in a state visit full of pomp and circumstance.

The move came after a newspaper column in which Khan said Trump did not deserve red-carpet treatment in Britain and was “one of the most egregious examples of a growing global threat” from the far-right to liberal democracy.

“@SadiqKhan, who by all accounts has done a terrible job as Mayor of London, has been foolishly “nasty” to the visiting President of the United States, by far the most important ally of the United Kingdom,” Trump wrote just before landing. “He is a stone cold loser who should focus on crime in London, not me.

The president added that Kahn reminded of the “terrible” mayor of his hometown, New York City Mayor Bill de Blaiso though “only half his height.” De Blaiso, a Democrat, is a longshot candidate in the 2020 presidential race. Khan supporters have previously accused Trump of being racist against London’s first Muslim mayor.

The president then added a few warm words for his hosts, tweeting that he was looking forward “to being a great friend to the United Kingdom, and am looking very much forward to my visit.”

The Trumps then boarded Marine One, the presidential helicopter, for the trip from Stansted Airport to the center of Britain’s capital.

The agenda for Trump’s weeklong journey is mostly ceremonial: a state visit and the audience with the queen, D-Day commemoration ceremonies on both sides of the English Channel and his first presidential visit to Ireland, which will include a stay at his coastal golf club.

During a ceremony welcoming him to Buckingham Palace, Trump and Prince Charles inspected the Guard of Honor formed by the Grenadier Guards wearing the traditional bearskin hats. Royal gun salutes were fired yesterday from nearby Green Park and from the Tower of London as part of the pageantry accompanying an official state visit, one of the highest honors Britain can bestow on a foreign leaders.

But the U.S. president arrived in Britain at a precarious moment. He faces a fresh round of impeachment fervor back home and uncertainty on the other side of the Atlantic Ocean. British Prime Minister Theresa May has faced months of political turmoil over Brexit and French President Emmanuel Macron is expected to use the 75th anniversary of the World War II battle that turned the tide on the Western Front to call for strengthening the multinational ties the U.S. president has frayed.

A year ago, Trump also took aim at his hosts before landing on English soil, blasting May in an interview just hours she hosted him for dinner. Though he has spared May so far this time, he has praised her rival, prime ministerial hopeful Boris Johnson, just days before May steps down as Conservative leader on Friday for failing to secure a Brexit deal. Jonathan Lemire & Kevin Freking, London , AP