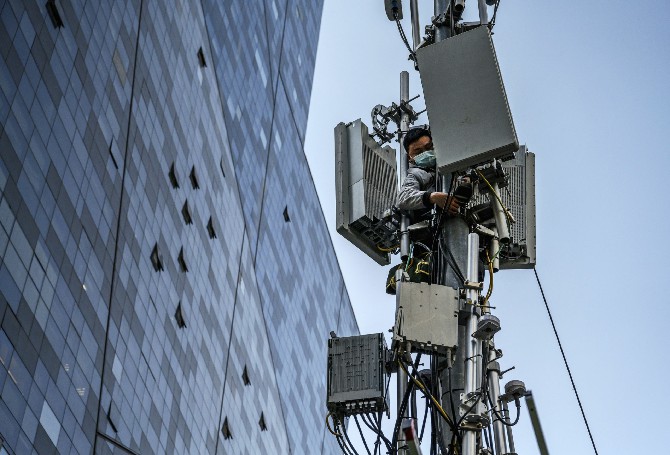 The U.S. government notified several of Huawei Technologies Co.’s suppliers that it’s revoking their licenses to work with the Chinese company and rejecting other applications in the last days of Donald Trump’s presidency, Reuters reported, citing unidentified people familiar with the matter.
Current licensed suppliers that have been notified include Intel Corp., Reuters said. In addition, the Commerce Department indicated its intent to deny “a significant number of license requests for exports to Huawei,” according to an email obtained by the news agency. Representatives for Intel and the U.S. Commerce Department didn’t immediately respond to requests by Bloomberg News seeking comment.
The latest move against Huawei is probably the Trump administration’s last strike to weaken the Chinese telecommunications giant and puts the spotlight on how the incoming Biden administration will approach the U.S.-China relationship. Asian chip stocks and Huawei suppliers including Samsung Electronics Co., Tokyo Electron Ltd., Advantest Corp. and Lasertec Corp. slid between 1% and 4% in yesterday’s trading.
Intel was among a small group of companies that the U.S. government cleared to do business with Huawei, which it put on its so-called entity list of national security threats in May 2019. Trump administration sanctions have cut Huawei off from business-critical relationships with the likes of Alphabet Inc.’s Google, which provided the Android software on hundreds of millions of Huawei smartphones, and Taiwan Semiconductor Manufacturing Co. for its cutting-edge chips.
Huawei has relied on Intel much less, primarily for its servers and consumer laptop products. A representative for the Chinese company didn’t immediately respond to a request for comment.
Trump has escalated his campaign to curb China’s technological rise as his term draws to a close. Xiaomi Corp., another smartphone and consumer electronics vendor, was among nine firms addedto the U.S. Defense Department’s list of companies with alleged ties to the Chinese military, a move that will restrict U.S. investments in its securities. Other companies include state-owned planemaker Commercial Aircraft Corp. of China Ltd., or Comac, which is central to China’s goal of creating a narrow-body plane that can compete with Boeing Co. and Airbus SE.
The profile of the companies targeted, including in the latest announcements on Thursday, is staggering. They include China’s three biggest telecom firms, its top chipmaker, its biggest social media and gaming players, its top two smartphone makers, its main deepwater energy explorer, its premier military aerospace contractor, its leading drone manufacturer and its primary commercial planemaker.
While the scope of Trump’s unprecedented actions has roiled markets, the full reckoning of their impact largely hinges on President-elect Joe Biden. His incoming administration will have the power to either keep the restrictions in place, remove them or tighten them further. Bloomberg