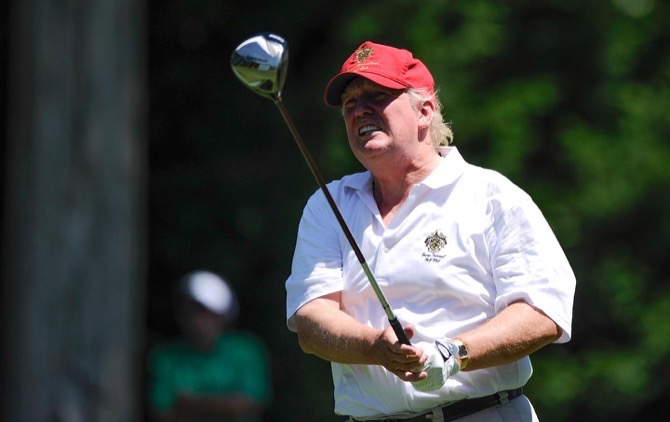 Donald Trump provided some free advertising for his golf courses in Scotland and Ireland on Saturday by highlighting a television commercial scheduled to run during next week’s Open Championship.

The president retweeted to his 62 million Twitter followers a post from the Trump Organization about what it termed the “Trump Triangle” – courses in Turnberry and Aberdeenshire, Scotland, and in Doonbeg, Ireland.

“Three of the most spectacular courses in the world @TrumpGolf,” the Trump Organization tweeted on Friday. “Tune into @GolfChannel next week during @TheOpen to catch our latest commercial.”

Trump’s tweet linked to a 30-second ad for the courses, in which a narrator invites viewers to “visit Trumpgolf.com today to book your ultimate links tour.”

It’s not the first time Trump has hyped his golf business on Twitter, stoking critics who’ve suggested he’s using his office to promote the financial interests of himself and his family in an unconstitutional manner.

In March, he tweeted about the Trump International Golf Links near Aberdeen, calling it “perhaps the greatest” course in the world. At the time, Walter Shaub, a senior adviser with the Citizens for Responsibility and Ethics who formerly led the Office of Government Ethics, called the tweet “Trump’s most explicit commingling of personal interests and public office to date.”

The U.S. Constitution has two clauses designed to prevent a president using power for profit.

This week, a federal appeals court tossed out a lawsuit accusing Trump of illegally profiting from his luxury hotel in downtown Washington. Had the court ruled against Trump, the Democratic attorneys general of Maryland and Washington may have gained more access to his finances to determine if he’d violated the so-called emoluments clauses.

“I don’t make money, but lose a fortune for the honor of serving and doing a great job as your President (including accepting Zero salary!),” Trump tweeted in response, calling the emoluments case “ridiculous.”

Trump handed the day-to-day control of his business empire to his sons Donald Jr and Eric and a chief financial officer before taking office, but refused to divest any of his holdings.

U.K. filings in August showed that Trump’s two Scottish courses posted a combined loss of 4.6 million pounds ($6.1 million) in 2017. At the time, the Trump Organization had pumped more than 150 million pounds into the courses without turning a profit.

One of Trump’s other golf courses has also been in the news. On Wednesday, the Trump Organization said in a statement that it had canceled a scheduled event that a Miami-area strip club planned to hold at the Trump Doral course near Miami, the Washington Post reported. Ros Krasny, Bloomberg