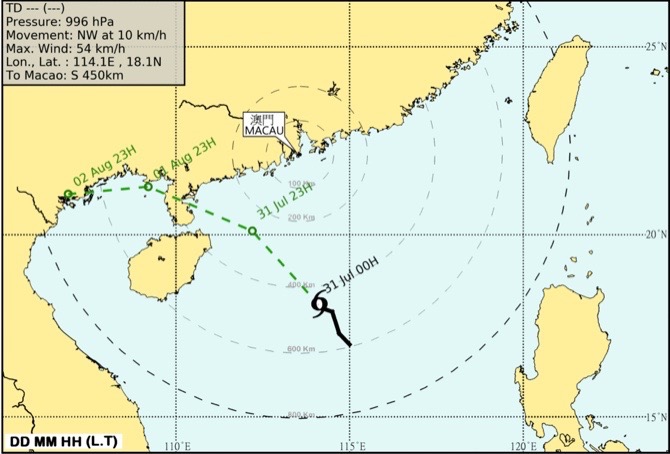 The Meteorological and Geophysical Bureau (SMG) raised Signal No.3 last night as a tropical cyclone brewing in the South China Sea looked set to come within 300 kilometers of Macau.

As of midnight today, the tropical cyclone was located about 450 kilometers south of Macau and moving in the direction of the Leizhou peninsula in Guangdong Province.

Local winds are expected to strengthen tonight as the cyclone reaches its closest point to the SAR. The SMG said that gusts in Macau may exceed 110 km/h at their most intense.

The weather authority raised Signal No.3 at 9 p.m. yesterday after Signal No.1 had been put in place just after midday. The SMG said yesterday that Signal No.3 will remain in effect at least until 5 a.m. this morning. The bureau also issued the yellow storm surge warning, warning that flooding may occur.

The weather authority warned that as winds over the bridges are expected to be strong, drivers should pay particular attention to traffic safety. Motorcyclists should travel between the Macau peninsula and Taipa via the motorcycle lane on Sai Van Bridge. DB