Typhoon Wipha (8PM) – Next few hours will be most intense 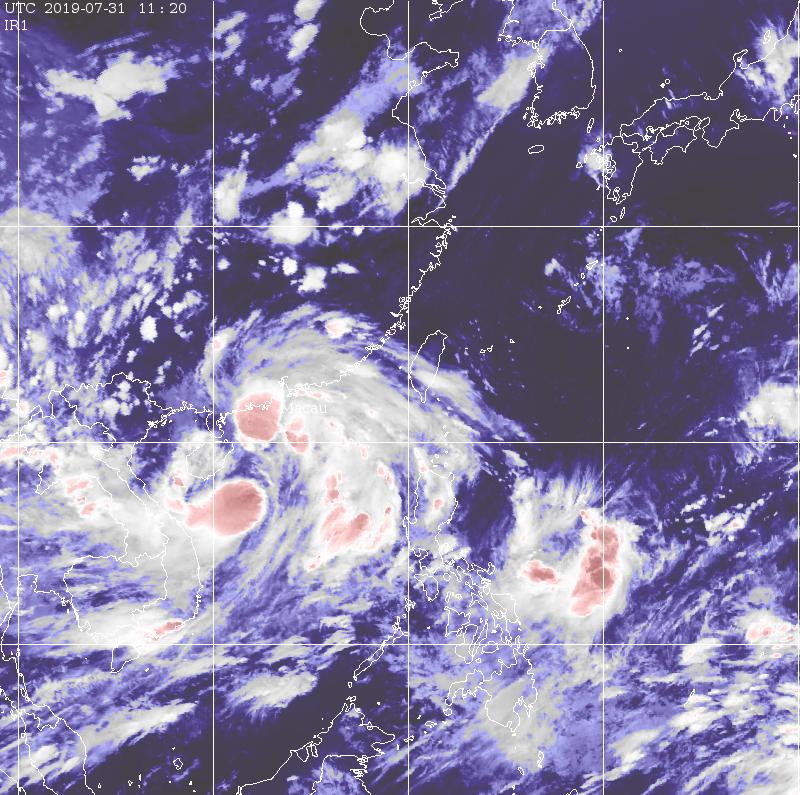 Typhoon Wipha will reach its closest point to Macau within the next few hours, according to the latest weather forecast provided by the Meteorological and Geophysical Bureau (SMG). Typhoon Signal No.8, which was hoisted by the weather authority at 2 p.m. this afternoon, is still in effect and will remain so for the remainder of Wednesday.

The tropical cyclone was located about 280 kilometers south-southwest of Macau at 8 p.m. It looked set to continue its path toward the Leizhou Peninsula in Guangdong Province, after earlier projections had shown it would pass directly over Hainan island.

The northward revision threatened to bring the typhoon closer to Macau, warranting the higher-than-expected signal from the weather authority earlier today.

The prevailing winds are currently north-easterly, though the SMG expects that the direction might change in the coming hours. It said it expects the peak impact on Macau to be felt at about 11 p.m.

Meanwhile, the yellow storm surge warning is still in force. The SMG warns that flooding might occur in low-lying areas on Thursday morning, between the hours of 7 a.m. and midday. The highest flooding level should not exceed 1 meter in height, it said.

The Civil Protection Operations Center (CPOC) has informed that a total of six people have so far been injured during the passage of Typhoon Wipha.

As of 6.30 p.m., the CPOC had recorded 18 cases of incidents in Macau and the islands, including damage to buildings, falling scaffolding and other objects.

The reported incidents included a road incident on Rua das Canforeiras in Coloane, one marine incident and one fire. Twelve of the incidents remain classified as “other incidents” and no further information is available.

Meanwhile, the CPOC decided to stop updating its WeChat service because the daily limit on message distribution had been met.

As of 7 p.m., some 250 passengers were waiting for the resumption of the ferry operations at the Outer Harbor Ferry Terminal. About 50 more were similarly waiting at the Taipa Ferry Terminal.

A total of 118 flights were cancelled at the Macau International Airport, most of which were services provided by Air Macau. Twelve flights were delayed, while one was “adjusted.” Air Asia issued a statement noting that 10 of its flights are rescheduled, nine of which are postponed to tomorrow.

Currently, 1,242 passengers remain at the airport terminal and about 300 passengers are waiting for taxi and bus services.

There are still no public buses or ferries, except the special buses connecting passengers from the Border Gate and the Hong Kong-Zhuhai-Macau Bridge to Praça Ferreira Amaral.

Meanwhile, fourteen violations of taxi regulations have already been recorded, four of which are overcharging passengers, while nine were found to be operating illegally.