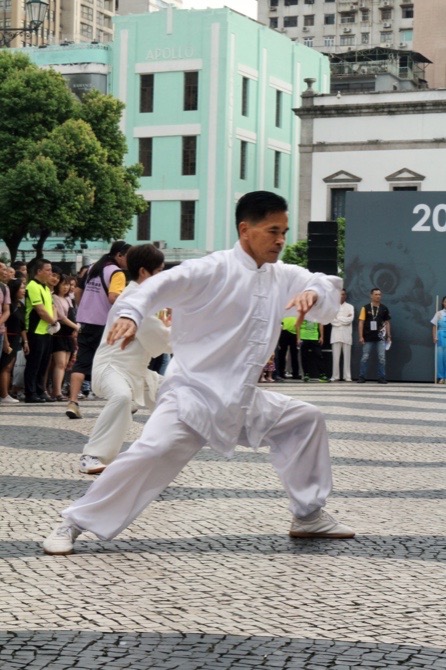 The Wushu Masters Challenge 2019, a four-day event that kicked-off on August 1 and that promised to bring the best of local and regional martial arts, came to an end last night with a grand event in which 21 Wushu masters invited by the Sports Bureau (ID) gave performances.

This year’s edition, the fourth since the event was first held in 2016, suffered several alterations from the original program due to the passage of Signal No. 8 Typhoon Wipha on July 31.

The weather caused significant changes to the original program that included the complete cancellation of the “Wushu Summer Festival” that should have been held over the four days at Tap Seac Square and Iao Hon Market, as well as all the events planned to be held on August 2 and 3 at Tap Seac Square, which were moved to the Pavilion B of the Tap Seac Multisport Pavilion. They included the “Greater Bay Area Kickboxing Invitational Tournament” and the “Sanda Challenger Competition.”

Still, in sports terms, all the events planned were held and with some notable performances by local athletes, including a highlight win for local athlete João Ramos in the International Chinese Kung Fu Fighting Federation (ICKF) Kickboxing Asian Championship Title in the category of under 66kg. Ramos took the title after defeating Hong Kong’s Wang Tingkai.

In the women’s section for the Mixed Martial Arts (MMA) category under 52kg, Macau’s Yun Siman lost the title only to Argentinian Laura Balin.

The other Macau athlete to be crowned at the event was Lam Chi Ian, who won the title of the inaugural “Greater Bay Area Kickboxing Invitational Tournament.”

Lam was participating on the Female section of the Youth Category (15-year-old) under 53kg and defeated another local contender, Lo I Lam.

The weather conditions surrounding the passage of Typhoon Wipha were accountable for the altering of the route of yesterday’s “Wushu and Dragon and Lion Dance Parade,” a traditional event that runs on the final day as part of the closing ceremonies and that attracts a lot of spectators as it traverses through the city’s historic center.

Planned to start at Senado Square and end at Tap Seac Square, this year’s route was shortened to finish at the Ruins of Saint Paul’s.

Still, the contestants to the “Belt and Road Dragon and Lion Dance Invitational Tournament” coming from China, Hong Kong, Malaysia, Singapore, and Vietnam among others, had the opportunity to enliven the touristic streets of the city center, filling them with flashy colors and lion and dragon dance rhythms.

As the organizer noted, the aims of the Wushu Masters Challenge go beyond the mere competition or presentation of the martial art, but intend to stimulate the people to learn more about this Chinese traditional art considered a national treasure of China.

As Wushu is not only considered a sport, the local government decided to sponsor part of the MOP18 million budget for this year’s event through the Cultural Industry Fund. The event is also financially supported by other government entities. 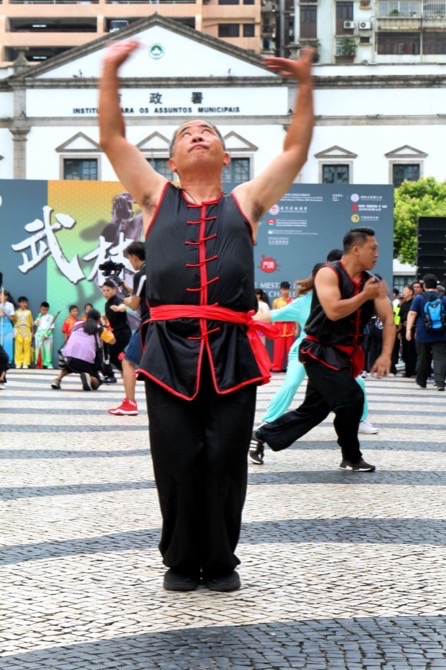