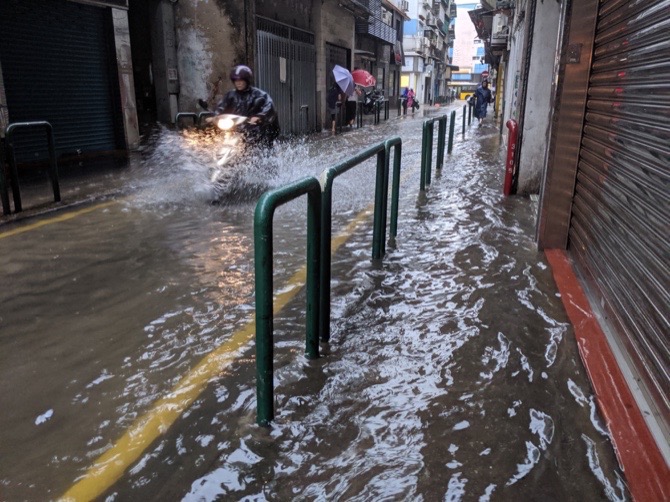 Typhoon Wipha brought minor flooding to the Inner Harbor district yesterday, just hours after typhoon Signal No.8 was lifted and replaced with the less serious Signal No.3. Late last night, a blue storm surge warning was still in force, according to the Meteorological and Geophysical Bureau.

An image taken by lawmaker Sulu Sou’s office, which is located blocks away from the coast of the Inner Harbor, shows flooding at ankle-height. It caused inconvenience to both traffic and pedestrians.

The minor flooding was due to a mismatch between strong winds and high tides, which prevented some of the water from retreating back to the shore.

Twenty-nine incidents were reported to the civil protection authorities while the Signal No.8 warning was in place. These accidents involved damages to buildings, falling concrete pieces, billboards and other objects, marine incidents and fire. A total of six injuries due to the typhoon were confirmed.

The Hong Kong-Zhuhai- Macau Bridge remained in full operation yesterday, with the shuttle bus service uninterrupted. Long queues for public transport were seen at the Macau Checkpoint in the early hours of the No. 8 warning. The Transport Bureau had to resume three bus routes to handle the incoming traffic. In previous years, once a Signal No. 8 is hoisted, all bus services are suspended.

During the last two hours of Signal No. 3 on Wednesday, bus stops and buses were packed with people. The condition also caused congestion on several main roads across the city.

Yesterday, Chief Executive Chui Sai On expressed his appreciation for the improvement of the civil protection disaster response mechanism in recent years. He said that the government was committed to deploying the utmost effort to keep the public and their property safe.

Chui also asked the authorities to prioritize maintaining a stable supply of water, electricity and telecommunication services to the public. These services remained stable and uninterrupted during the entire typhoon period. AL