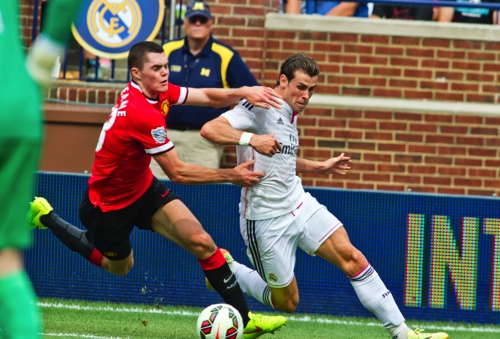 Manchester United defender Michael Keane, left, commits a foul on Real Madrid forward Gareth Bale in the box in the first half of a Guinness International Champions Cup soccer match at Michigan Stadium

There’s little doubt the UEFA Super Cup’s star local attraction will be Gareth Bale, the Cardiff boy turned USD
130-million Real Madrid star, playing for the Spanish giants on home soil for the first time.
The winger is in the Welsh capital with little to prove, having completed a debut season at Madrid, when his price-tag brought such high expectations, by netting the decisive goal in May’s Champions League final win. The limelight was taken, just briefly, even off Cristiano Ronaldo on that May night against Atletico Madrid in Lisbon.
It was ending a 12-year wait for the coveted “Decima” — a 10th European Cup — that brings Madrid back in contention for the Super Cup today in the Cardiff City Stadium and a meeting with the Europa League winners, Spanish rival Sevilla.
Success was the springboard for another offseason of vast spending, lavishing around $150 million to bring two revelations of the World Cup to the Spanish capital: Germany midfielder Toni Kroos and Colombia playmaker James Rodriguez, who are in line to make their Madrid debuts in Cardiff after being included in the 22-man squad.
It was only a year earlier that $130 million was spent bringing Bale from Tottenham to link up with Ronaldo, who cost only slightly less in 2009 when joining from Manchester United.
The $108-million swoop for Rodriguez from Monaco was wrapped up soon after he returned from a career-defining World Cup, scoring a tournament-
leading six goals in Colombia’s run to the quarterfinals.
Now the technically-gifted playmaker, is preparing to step into a star-studded Madrid team looking to collect the first of a possible six trophies this season.
“They are all stars,” the 23-year-old Rodriguez said. “For me it is a pleasure to be with them. Even training with them. It is something unique and I hope I can play here together with them for many years.”
This year much of Madrid’s concentration will be on becoming the first team in the post-1993 Champions League era to defend the European Cup — especially after waiting so long to bring it back to Santiago Bernabeu.
“When you get this title with Madrid it is the pinnacle for a player and hopefully we can repeat it in the future,” defender Alvaro Arbeloa said. “We knew what it meant, not just for the club, but for all of our fans, and sharing that joy with them is something we will never forget … Real Madrid’s prestige has always been a result of its victories in Europe.”
Even though the Super Cup lacks the status of the Champions League, it is a chance to put down an early marker as the European season begins.
“We are hungry to win a lot of titles and now we have another chance, we hope to make the most of it,” Arbeloa said.
“These matches at the start of the season are different,” Arbeloa added ahead of the trip to Cardiff. “Neither team is at full fitness and we’ll certainly see more chances than there are in a European final. I hope it’s an attractive match.”
Then it’s back to Spain for the two-legged domestic Super Cup on Aug. 19 and 22 against Atletico Madrid before the mission to take the league title off its city rival begins against newly-promoted Cordoba on Aug. 25. AP