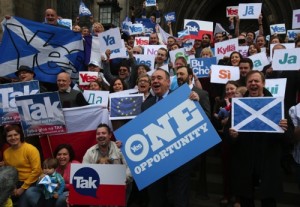 The British political establishment descended on Scotland on Wednesday to plead for a united United Kingdom, after polls suggested the once-fanciful notion of Scots voting to break from Britain has become a real possibility in next week’s referendum.
The leaders of the three main London-based parties — all of them unpopular in Scotland — wooed skeptical Scottish voters with the fervor of a rejected lover. But some Scots seemed unmoved, and increasingly confident independence leader Alex Salmond accused his opponents of succumbing to panic.
In a rare display of cross-party unity, Prime Minister David Cameron, Labour leader Ed Miliband and Liberal Democrat chief Nick Clegg all pulled out of a weekly House of Commons question session to make a campaign dash to Scotland, as polls indicated the two sides are neck-and-neck ahead of the Sept. 18 referendum.
Cameron said Scottish independence would break his heart, in a personal plea aimed at preserving the 307-year-old Anglo-Scottish union — and preventing himself from going down in history as the last prime minister of Great Britain. He is likely to face pressure from his Conservative Party to step down if Scots vote to secede.
“I would be heartbroken … if this family of nations is torn apart,” Cameron told an invited audience at the Edinburgh headquarters of the Scottish Widows insurance firm.
While Cameron has ordered the blue-and-white Scottish flag to be flown over his office at No. 10 Downing Street until the vote, his critics noted that he did not risk speaking before an uninvited audience of Scots on the street.
Cameron’s Conservatives are deeply unpopular in Scotland, where the welfare cuts, unemployment and privatization of Prime Minister Margaret Thatcher’s time are remembered with bitterness. Many independence supporters cite the Cameron government’s budget-slashing policies as one reason they want to leave the United Kingdom.
Cameron insisted the vote was not about giving “the effing Tories” a kicking.
“This is not a decision about the next five years,” he said. “This is a decision about the next century.”
Like Cameron, Miliband sounded like a lover pleading for his partner not to leave, telling an audience of Labour supporters near Glasgow that he supported Scotland with “head, heart and soul,” and promising change if the union stuck together.
“Please stay with us,” he said. “Stay with us because we are stronger together. Stay with us so we can change Britain together.”
Though many Scots traditionally support Labour, Miliband is widely seen as out of touch. And like Cameron, he faces a predicament in the event of independence. Labour holds two-thirds of Scotland’s seats in the British Parliament, and their removal would make it harder for Labour to become the governing party again.
The politicians’ entreaties did little to impress committed Yes voters.
“If Cameron, Clegg and Miliband really cared, they would have been up here campaigning to save the U.K. weeks ago and not just at the last minute when the polls suggest there’s a chance they could lose,” said Alistair Davidson, a computer programmer from Dunblane in central Scotland.
Salmond said the London-based politicians were only in Scotland because “they are panicking,” and predicted their visit would help his Yes campaign.
“If I thought they were coming by bus, I’d send the bus fare,” he said. Jill Lawless and Paul Kelbie, Glasgow, AP