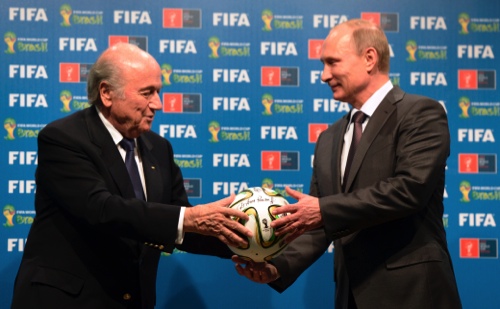 Britain’s Deputy Prime Minister wants Russia stripped of the right to host the 2018 World Cup to punish President Vladimir Putin for “belligerent behavior” in the Ukraine crisis.
While calling for tougher sanctions against Russia, Nick Clegg told The Sunday Times newspaper that it is “unthinkable” for President Vladmir Putin to have the opportunity to exploit football’s biggest sporting event to enhance his own status.
Clegg’s intervention comes after some lawmakers in Germany called for the World Cup to be moved because of Russia’s alleged involvement in shooting down a Malaysia Airlines plane over Ukraine, killing all 298 people on board.
“After this terrible, terrible downing of that jet, it is essential that the European Union gets tough on Vladimir Putin,” Clegg was quoted as saying. “We’ve got to take tougher sanctions, but also we’ve got to make it quite clear that he cannot expect to get the privileges of being at the top table of world affairs if he’s not prepared to play by the basic rules of world affairs.
“If he carries on with this belligerent behavior … it’s unthinkable that he should have the privilege of hosting the World Cup in 2018. You can’t have the beautiful game marred by the ugly aggression of Russia on the Russian-Ukrainian border.”
Clegg, who leads Britain’s Liberal Democrats, said the Russian President had already “milked” the Winter Olympics in Sochi in February, and that hosting the World Cup would be “an enormous advantage to Putin personally.”
“There’s no question he sees it for himself and for his prestige as a huge gain,” Clegg said. “The idea that the world should accord Russia that prestige is beyond belief. I don’t know how many people have got to be shot out of the skies before people say enough is enough.”
Moscow has continually denied involvement in the downing of the plane.
FIFA is standing by Russia as the next World Cup hosts, saying Friday that keeping the tournament “can achieve positive change” in the country. FIFA President Sepp Blatter had already rejected calls to strip Russia of the tournament after it annexed the Crimea earlier this year. AP