UK | Johnson hopes schools in England can reopen on March 8 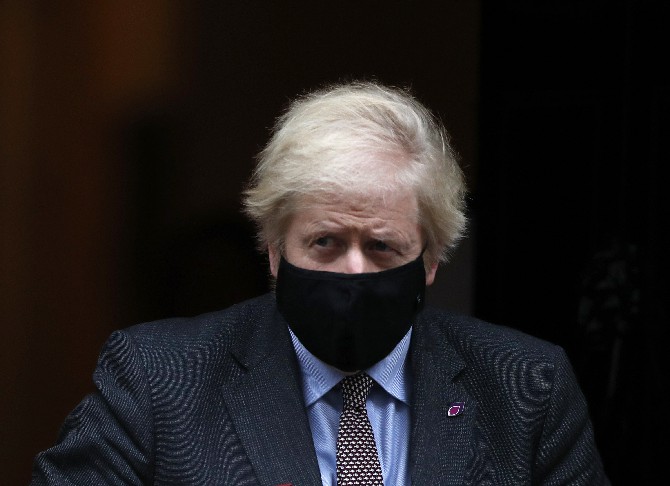 British Prime Minister Boris Johnson indicated yesterday [Macau time] that the coronavirus lockdown in England will remain in place until at least March 8 as he ruled out any imminent return to school for most students.
In a statement to lawmakers, Johnson also confirmed new restrictions for travelers arriving in England from countries where the government thinks there is a risk of known variants of the coronavirus.
He said the U.K. remains in a “perilous situation” with more than 37,000 patients hospitalized with COVID-19, nearly double the number during the country’s previous peak in April.
While dashing hopes of a return to classrooms after a mid-February school break, Johnson cautioned that the March 8 target is an aspiration dependent on progress on the vaccination front and ongoing reductions in the prevalence of the virus in the community. He said a “roadmap” for the “gradual and phased” easing of the lockdown will be unveiled in the week commencing Feb. 22.
“The first sign of normality beginning to return should be pupils going back to their classrooms,” he said.
England’s schools are closed to all students bar those deemed to be vulnerable and children of key workers, such as doctors and delivery drivers. The same applies in Scotland, Wales and Northern Ireland.
Johnson said he hoped that by Feb. 15, the four most vulnerable groups, including those over the age of 70 and nursing home residents, will have gotten a first vaccine jab that would give them a level of immunity within three weeks.
“We hope it will therefore be safe to begin the reopening of schools from Monday, March 8 with other economic and social restrictions being removed thereafter as and when the data permits “ he said.
Johnson’s announcement points to shops selling non-essential items and pubs and restaurants remaining closed until well into March at least.
Johnson also toughened border rules to limit the chances of new variants of the coronavirus being seeded in England. He confirmed plans for a 10-day quarantine in hotels or other government-provided accommodation for anyone arriving from 22 hotspot countries, including South Africa, Portugal and all in South America.
Given travel bans are already in place for these countries, the quarantine measures will largely apply to British residents, who will also have to pay for their hotel stays.
“They will be met at the airport and transported directly into quarantine,” he said.
In addition, he said anyone leaving England will be asked the reasons behind their trip and will be instructed to go home if they do not have a valid reason. Under lockdown restrictions, holidays abroad are not allowed. He said discussions are taking place so the rules apply across the U.K.
Further details will be unveiled next week. Critics are saying the government should be mandating quarantines for every arrival.
On Tuesday, the U.K. became the fifth country to record more than 100,000 coronavirus-related deaths. The U.K. is the smallest to breach that threshold, and has one of the world’s worst COVID-19-related mortality rates.
Johnson has come under renewed fire for his handling of the pandemic, specifically for consistently being too slow in making tough decisions.
Keir Starmer, leader of the main opposition Labour Party, pointed to a series of missteps by Johnson that he says represent a “damning indictment of how the government has handled this pandemic.”
For one, Johnson is being criticized for delaying the latest lockdown after scientists had informed him on Dec. 18 that a new variant of the virus first identified in London and the southeast of England was up to 70% more infectious than the original coronavirus strain.
The lockdown only came into force on Jan. 5, a delay that critics say fueled the rapid increase in new coronavirus infections around the turn of the year, and the subsequent acute pressure on hospitals and deaths.
Though there’s evidence the lockdown has lowered cases, infections are still running at relatively high levels and are liable to rise sharply again if restrictions are relaxed too soon and too much. PAN PYLAS, LONDON, AP