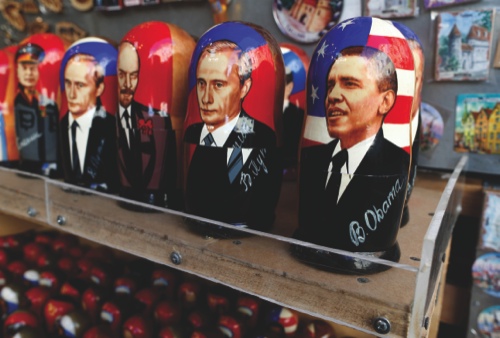 The office of Ukrainian President Petro Poroshenko said yesterday that he and Russian President Vladimir Putin are in agreement on a cease-fire in eastern Ukraine, but the statement was ambiguous and a top rebel figure said no cease-fire was possible without Ukraine withdrawing its forces.
The brief statement said “mutual understanding was reached regarding the steps that will contribute to the establishment of peace” but gave no details.
There have been previous statements of agreements on steps for peace, but the conflict has only intensified. Yesterday’s statement came as U.S. President Barack Obama arrived in Estonia in a show of solidarity with NATO allies who fear they could be the next target of Russia’s aggression.
Poroshenko’s office first said that there “agreement on a permanent cease-fire,” but later revised the statement to say “agreement on a cease-fire regime.” The changes appeared in Ukrainian, Russian and English-language versions issued by the office.
That appeared to indicate they were in agreement on conditions necessary for a cease-fire, not that one would imminently be implemented.
Vladislav Brrig, a rebel official, told The Associated Press, “As long as Ukrainian forces are on the territory of the Donetsk People’s Republic there can be no ceasefire”
The rebels ignored a 10-day unilateral cease-fire that Poroshenko had called in June.
Russian markets jumped on first reports of an agreement. The MICEX benchmark was 3 percent higher while the ruble rose 1.2 percent against the U.S. dollar.
Germany’s Dax index, which has been particularly sensitive to news regarding the Ukrainian crisis because of the country’s economic ties with Russia, was up 1.6 percent.
At midday yesterday, the MICEX had eased to 2.7 percent higher and the DAX was up 1.2 percent.
Obama said it was too early to tell what the announcement meant. He noted previous unsuccessful attempts and questioned whether pro-Russian separatists would abide by any cease-fire.
“We haven’t seen a lot of follow-up on so-called announced cease-fires,” Obama said. “Having said that, if in fact Russia is prepared to stop financing, arming, training, in many cases joining with Russian troops, activities in Ukraine and is serious about a political settlement, that is something we all hope for.”
Ukraine and the West have accused Russia of sending its troops and weapons to support pro-Russian insurgents who have been fighting government forces in eastern Ukraine since mid-April. Moscow has vehemently denied this charge.
That denial leaves unclear how effective the truce announced yesterday would prove to be. After a meeting with Poroshenko last week, Putin had said a cease-fire was not discussed because Russia was not a party to the conflict.
Putin’s spokesman, Dmitry Peskov, was quoted by Russian news agencies yesterday as saying the leaders had “largely agreed on steps that would be conducive to a cease-fire,” but repeated that Russia is not involved in the fighting.
Rebel leader said earlier this week that they would respect Ukraine’s sovereignty in exchange for autonomy. The rebels previously have called for full independence for their regions or possible absorption into Russia. Poroshenko has spoken in favor of devolving some of the central government’s power to regions, but that is far short of autonomy for the rebel regions.
Over the weekend, the European Union leaders agreed to prepare a new round of sanctions that could be enacted in a week, after NATO accused Russia of sending tanks and troops into southeastern Ukraine. A NATO summit in Wales today is also expected to approve measures designed to counter Russia’s aggressive actions in Ukraine.
Fighting in eastern Ukraine has killed nearly 2,600 people and forced over 340,000 to flee their homes, according to the U.N. AP