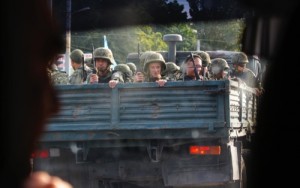 Ukrainian soldiers drive on a truck in the southern coastal town of Mariupol, Ukraine

European Union governments abruptly put on hold for at least a “few days” new sanctions against Russia, allowing more time to assess the viability of a cease-fire in Ukraine without risking further trade retaliation by the Kremlin.
The EU’s second package of economic penalties against Russia was delayed late Monday in Brussels by the bloc’s 28 governments, which approved the measures in principle while stopping short of giving the green light for their publication in the Official Journal and entry into force. The governments will assess the status of the cease-fire tomorrow at a meeting in Brussels, the EU said yesterday.
The planned provisions – originally due to be published yesterday – include barring some Russian state-owned defense and energy companies from raising capital in the EU, according to a European official who spoke on the usual condition of anonymity.
The Sept. 5 cease-fire between the Ukrainian government and pro-Russian separatists has raised the prospect of a lasting truce that would be the biggest breakthrough yet to end a conflict that has killed at least 3,000 people and soured Russia’s relations with its former Cold War foes.
“The entry into force through the publication in the Official Journal will take place in the next few days,” EU President Herman Van Rompuy said in a statement late Monday. “This will leave time for an assessment of the implementation of the cease-fire agreement and the peace plan. Depending on the situation on the ground, the EU stands ready to review the agreed sanctions in whole or in part.”
Today’s meeting of representatives from the EU’s member nations “will take up this issue again,” Maja Kocijancic, spokeswoman for EU foreign-affairs chief Catherine Ashton, told reporters today in Brussels. “Now it’s up to the member states to look at this situation again and examine the implementation of the cease-fire agreement and decide how to take this forward,” Kocijancic said.
The agreement to halt fighting came in the midst of an EU push to ratchet up penalties against Russia in coordination with the U.S. in a bid to force Russian President Vladimir Putin to end support for the rebels in eastern Ukraine. Putin’s backing of Ukrainian separatists and his annexation of Crimea have jolted the security order in Europe.
Finnish Prime Minister Alexander Stubb said Monday that he is “very worried” about the possibility of Russian counter-sanctions should the EU enact the new package. At the same time, “we are strongly of the opinion that the cease-fire has so far not been permanent,” Stubb told reporters in Helsinki.
In a sign the cease-fire accord has been shaky, Ukrainian Defense Ministry spokesman Oleksiy Dmytrashkovskyi said yesterday in a YouTube video that pro-Russian rebels overnight shelled government positions near the airport of the eastern city of Donetsk, as well as four more positions of Ukrainian troops in other areas, without causing troop casualties.
On Monday, Ukraine said the rebels targeted Mariupol, a frontline city in the east of the country, after Ukrainian President Petro Poroshenko announced a visit there.
Road blocks near the port city on the Sea of Azov came under fire from militants Monday, presidential spokesman Svyatoslav Tsegolko said on Twitter.
“I am not optimistic at all – I have not been optimistic from the beginning,” Didier Burkhalter, chairman of the Organization for Security and Co-operation in Europe, which helped mediate and is monitoring the cease-fire, said at a news conference in Geneva. Even so, “we want to give it a chance.”
Russian Foreign Minister Sergei Lavrov said yesterday that it appears the cease-fire is being observed on the whole. Speaking to reporters in Moscow, he said Russia hopes the truce “will be consolidated” within days. Jonathan Stearns, Bloomberg