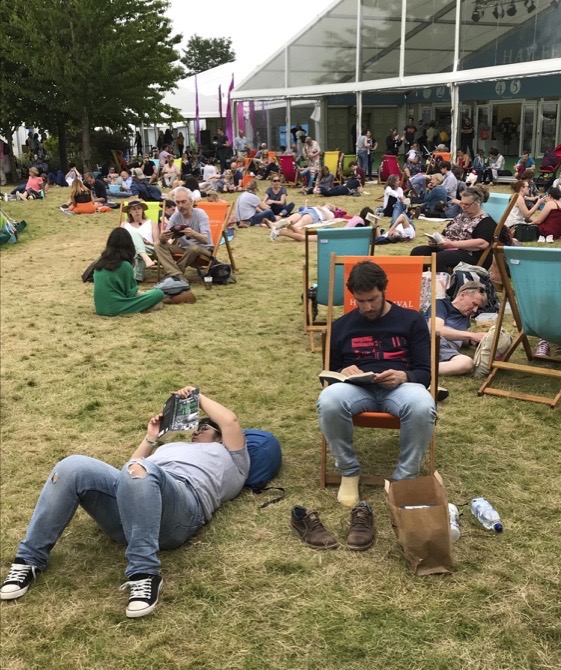 At Britain’s leading literary gathering, the word of the year was anxiety.

Fifty shades of worry —about climate change, mental health and of course Brexit — dominated the Hay Festival this year. The event is an annual carnival of ideas held amid sheep-studded green hills in Hay-on-Wye, a tiny Welsh town with about 2,000 residents and close to 20 bookshops.

With Britain’s departure from the European Union in limbo, its population split, its politicians deadlocked — and divisive U.S. President Donald Trump in Britain on Monday for a state visit — many of the 600 authors and 100,000 audience members were asking where things went wrong, and what can be done about it.

“I used to think ‘the Brits are so calm when they talk about politics. They don’t get angry,’” Turkish-British novelist Elif Shafak told an audience in Hay, 240 kilometers northwest of London. “I no longer think that way. Brexit literally broke the political narrative here and brought to the surface a much more toxic form of politics.”

The festival, which ended yesterday [Macau time], draws novelists, poets, scientists and politicians, and was famously dubbed the “Woodstock of the mind” by former U.S. President Bill Clinton. It’s an annual indicator of what’s on the mind of a large and largely liberal chunk of Britain. This year, the best-selling book in the onsite bookshop was “Heroic Failure,” an evisceration of Brexit failures by Irish journalist Fintan O’Toole.

Britain’s 2016 decision to quit the European Union created a deep fault-line between the 48% of voters who wanted remain in the European Union and the 52% who voted to leave. Three years on, Britain’s politicians have failed to agree on exit terms, the country is still in the bloc, and voters on both sides are angry. The words “traitor” and “betrayal” are shouted and shared on social media in what often feels like a bad-tempered dialogue.

“We have half the country who think the other half are idiots,” said British historian Peter Frankopan, whose book “The New Silk Roads” charts the growing power of Asia. “One of the challenges is how you blend those perspectives. How do you sit in the middle?”

The depth of the political chaos has come as a surprise, even to the experts. American historian Jared Diamond, whose latest book examines nations under pressure in his latest book “Upheaval – How Nations Cope with Crisis and Change,” told his audience at Hay that he originally planned to include a chapter on Britain, a country long regarded as a stable leading democracy.

“It was going to be a happy-ending chapter,” he said, about how Britain in the late 20th century overcame a crisis over its loss of empire “by finding a new identity in joining the European Union.”

The 2016 Brexit referendum made him reconsider that thesis. Diamond said that at the moment, he’d hesitate to write about Britain at all.

“Things are changing so fast with Brexit anything I wrote a week ago would be out of date,” he said.

As it stands, Britain is due to leave the EU on Oct. 31, the delayed departure date set by the bloc amid political deadlock in London. Prime Minister Theresa May has given up trying to get her unpopular divorce deal approved by Parliament and will step down as Conservative Party leader on Friday.

Most of the more than a dozen contenders to replace her have vowed to take Britain out of the bloc, even without a deal. Pro-EU Britons — along with most economists — say that would plunge the country into recession. But many Brexit supporters believe the only alternative is being stuck in the EU indefinitely.