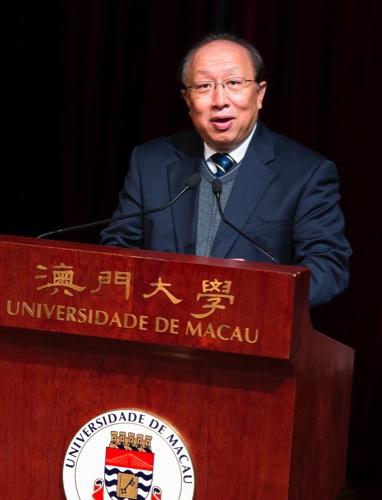 The University of Macau (UM) will start its 2014/2015 school year next Monday. About 4,000 students will live in the Residential College (RC) in the new campus.
There will be more than 9,000 students in the new school year, including 1,700 freshmen.
UM’s rector Wei Zhao said the new campus in Hengqin is well prepared, and the University will keep in touch with the Transport Bureau over traffic issues for students. There are currently three bus routes in operation that service UM’s new campus.
Zhao suggested that some students feel that the general education courses are unrelated to their majors. He stressed that the general education courses are a new initiative. The school hopes to encourage students to focus not only on their vocational courses but also on gaining knowledge in fields outside their major. “We need to persuade students that those who wish to attain elite status in their chosen profession need to master knowledge outside of their major.” But Zhao said the school would do a review regarding students’ opinions.
As for the slow process of moving out of the old campus in Taipa, Zhao said the move would not be fully completed until November, since large laboratory facilities have yet to be transferred to Hengqin. The rector believes it is up to the government to decide on the future use of the Taipa Campus, and agrees with the authorities’ decision to use it for higher education purposes.
The MSAR has announced that the university’s current campus will be reserved for higher educational purposes. In addition, a one-year temporary measure of lending and renting the old campus’ dormitories to three local universities will commence in the new school year.
When asked about UM’s former deputy professor Bill Chou, who was sacked from his post, Zhao reiterated that the school not renewing Chou’s contract had nothing to do with the professor’s political activities or speeches in the community.
“In the entire process under the disciplinary action we have taken against him, it was nothing to do with his political view, his political activity, etc, he had in the community. It’s perfectly ok he has his own view; it’s perfectly ok he has his own activity in the community. He can do anything he wants to, but when in the classroom, when you are on campus, when you are dealing with students – we have to be careful. He had to follow the guidelines,” the rector said.
Zhao added that it was a suspected violation of professional conduct by the professor that led to an investigation and his dismissal, and that the school did not publish the report in order to protect the rights of each party. According to the rector, Chou’s political speeches are not mentioned in the report.
Zhao stated that there is a risk that teachers might get involved in disciplinary procedures if they are not familiar with the current regulations, and Chou is not alone in his plight. “For example, if a teacher requires students to participate in a demonstration, and then provides bonus marks to those who take part while awarding nothing to those that didn’t … That teacher has violated the school’s professional conduct regulations. (…) He/she is not politically neutral.” He declared that the standard for teachers’ professional conduct should be higher than for people in other occupations, as students are supposed to study in a fair learning environment.
Zhao’s speech occurred during an exclusive interview with journalists yesterday.
Last Sunday, professor Bill Chou said that the University of Macau did not renew his contract due to a politically motivated move. UM’s statement contradicted the accusation: “By linking the University’s disciplinary action to a violation of academic and speech freedom, Prof Chou has undermined the reputation of the University.”  GY