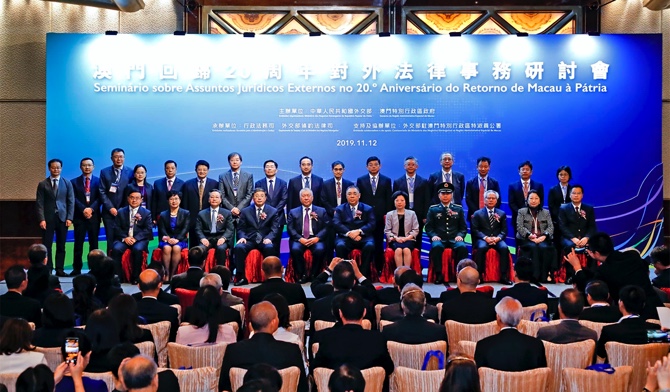 A law professor from the University of Macau has highlighted the importance of Guangdong, and downgraded Macau and Hong Kong’s position in the Greater Bay Area development strategy.

Previously, many scholars raised questions regarding the differences between the legal systems of the SARs and mainland China, with commentators generally believing that it will be difficult for the three places to remove barriers created by differences in law.

Commenting on the matter, Zhao opined that there is still a priority in terms of law establishment and that he attributes more importance to Guangdong, having once again pointed out that the establishment of Guangdong’s law is the major component.

“The idea of establishing laws together should be ruled out. Jointly drafting a development plan is a wistful,” Zhao said.

In addition to his abovementioned opinion, Zhao also proposed that the Guangdong Greater Bay Area development should not look to Hong Kong, but should look instead to other bay areas, having indicated that there are more international examples than just Hong Kong.

Despite previous opinions declaring that the Central Government does not want to replace Hong Kong with Shenzhen, Zhao believes that Shenzhen can still develop into an international financial center.

Qin Qianhong, a professor in law from mainland’s Wuhan University, disagrees with Zhao’s legal opinion. “According to your logic, Zhuhai should also make itself one platform and one center because Macau is doing the same. Such a design may be unsuited to the original idea [of the GBA] and it will not constitute a systematic advantage within the Greater Bay Area. The cities will be competing with each other,” said Qin commenting on Zhao’s option.

Qin also believes that Guangdong, Hong Kong and Macau must reach a consensus in terms of the rule of law. “If we don’t highlight the consensus among the three regions, why are we making this Greater Bay Area? We could simply keep the current status,” suggested Qin.

Qin explained that in mainland China, the Communist Party is a political advantage, for the benefit of mainland China’s opening up. He thinks that such an advantage may not exist when Guangdong negotiates with its Hong Kong and Macau compatriots.

Despite his disagreements with Zhao, Qin agrees that the leading role of the Greater Bay Area should be played by the Guangdong province.

Chui for true form of

The Chief Executive Chui Sai On has stressed the full and faithful implementation of the policy of “one country, two systems,” and the core value of loving the motherland and loving Macau.

The symposium on Macau-related Foreign Legal Affairs in Celebration of the 20th Anniversary of Macau’s return to the Motherland was held yesterday.

Chui acknowledged in his opening remarks the great success of the Macao SAR in implementing “one country, two systems” since its return to the Motherland. He thanked the Central Government for its support of Macau in expanding international exchange and cooperation and promoting Macau-related foreign legal affairs.

He also emphasized the important role of Macau in China’s reform and opening up process and diplomacy with Chinese characteristics in the new era, and the increasing importance of Macau-related foreign affairs and international legal cooperation in this regard.

Shen Beili spoke highly of the achievements of the Macau-based foreign legal affairs over the past 20 years for effectively safeguarding national sovereignty, security and interests and the long-term prosperity and stability of Macau.