UN chief: World is ‘paralyzed’ and equity is slipping away 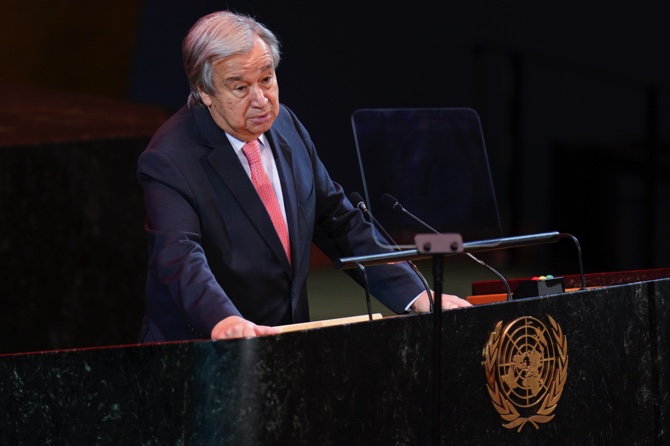 In an alarming assessment, the head of the United Nations warned world leaders yesterday that nations are “gridlocked in colossal global dysfunction” and aren’t ready or willing to tackle the challenges that threaten humanity’s future — and the planet’s. “Our world is in peril — and paralyzed,” he said.

Speaking at the opening of the General Assembly’s annual high-level meeting, Secretary-General Antonio Guterres made sure to emphasize that hope remained. But his remarks reflected a tense and worried world. He cited the war in Ukraine and multiplying conflicts around the world, the climate emergency, the dire financial situation of developing countries and setbacks in U.N. goals for 2030 including an end to extreme poverty and quality education for all children.

He also warned of what he called “a forest of red flags” around new technologies despite promising advances to heal diseases and connect people. Guterres said social media platforms are based on a model “that monetizes outrage, anger and negativity.” Artificial intelligence he said, “is compromising the integrity of information systems, the media, and indeed democracy itself.”

The world lacks even the beginning of “a global architecture” to deal with the ripples caused by these new technologies because of “geopolitical tensions,” Guterres said.

His opening remarks came as leaders from around the planet reconvened at U.N. headquarters in New York after three years of pandemic interruptions, including an entirely virtual meeting in 2020 and a hybrid one last year. This week, the halls of the United Nations are filled once more with delegates reflecting the world’s cultures. Many faces were visible, though all delegates are required to wear masks except when speaking to ward off the coronavirus.

Guterres made sure to start out by sounding a note of hope. He showed a video of the first U.N.-chartered ship carrying grain from Ukraine — part of the deal between Ukraine and Russia that the United Nations and Turkey helped broker — to the Horn of Africa, where millions of people are on the edge of famine It is, he said, an example of promise and hope “in a world teeming with turmoil.”

He stressed that cooperation and dialogue are the only path forward — two fundamental U.N. principles since its founding after World War II. And he warned that “no power or group alone can call the shots.”

“Let’s work as one, as a coalition of the world, as united nations,” he urged leaders gathered in the vast General Assembly hall.

It’s rarely that easy. Geopolitical divisions are undermining the work of the U.N. Security Council, international law, people’s trust in democratic institutions and most forms of international cooperation, Guterres said.

“The divergence between developed and developing countries, between North and South, between the privileged and the rest, is becoming more dangerous by the day,” the secretary-general said. “It is at the root of the geopolitical tensions and lack of trust that poison every area of global cooperation, from vaccines to sanctions to trade.

Before the global meeting was gaveled open, leaders and ministers wearing masks to avoid a COVID-19 super-spreader event wandered the assembly hall, chatting individually and in groups. It was a sign that that despite the fragmented state of the planet, the United Nations remains the key gathering place for presidents, prime ministers, monarchs and ministers.

Nearly 150 heads of state and government are on the latest speakers’ list, a high number reflecting that the United Nations remains the only place not just to deliver their views but to meet privately to discuss the challenges on the global agenda — and hopefully make some progress. EDITH M. LEDERER, UNITED NATIONS, MDT/AP