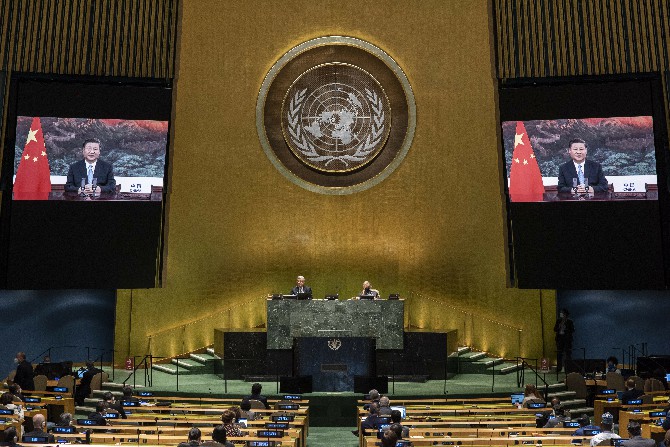 China’s leader took oblique potshots at the United States and its foreign policies yesterday [Macau time], cautioning in a U.N. address that the world must “not fall into the trap of a clash of civilizations” — remarks played minutes after delegates heard the American president insist that the United Nations “hold China accountable” for how it handled the emergence of the coronavirus.
“Major countries should act like major countries,” Xi Jinping said in a speech to the U.N. General Assembly, a speech made remotely and recorded in advance because the pandemic prevented leaders from convening as they have for decades. The virus first emerged in China early this year and has spread around the world, killing nearly 1 million people.
Xi, China’s president and the leader of its Communist Party, cast the fight against the virus as an important exercise in international cooperation, an opportunity to “join hands and be prepared to meet even more global challenges.”
“COVID-19 reminds us that the economic globalization is an indisputable reality and a historical trend,” Xi said. “Burying one’s head in the sand like an ostrich in the face of economic globalization or trying to fight it with Don Quixote’s lance goes against the trend of history. Let this be clear: The world will never return to isolation.”
Such remarks, while not naming U.S. President Donald Trump, are highly critical of him and his “America First” philosophy, which goes against China’s public stance on how diplomacy should be managed. In reality, China often acts unilaterally in affairs both domestic and international.
Earlier in the day, Trump used his own U.N. speech to roundly condemn Xi’s government for what the American president frequently calls “the China virus,” a term he used again yesterday. He referred to the virus as the “invisible enemy.” Many consider the very term “China virus” to be racist.
Though Trump had lavish praise for Xi early in his term, two key issues — a tariff dispute and the emergence of coronavirus — have helped cause his administration to take a more hardline attitude toward the Chinese government.
“The United Nations must hold China accountable for their actions,” Trump said in his own speech.
China has a longtime practice of reflexively rejecting any criticism of its policies. Yesterday was no exception. While Xi, being prerecorded and not there, could not rebut what Trump said, his U.N. ambassador was on site in the General Assembly chamber and responded directly while introducing the Xi video.
“At this moment, the world needs more solidarity and cooperation, and not a confrontation,” Zhang Jun said. “We need to increase mutual confidence and trust, and not the spreading of political virus. China resolutely rejects the baseless accusation against China.”
Xi spoke at a historical moment in which China is working to manage its staggering — and staggeringly complex — military, economic and political rise while confronting the aggressive containment strategies of the world’s current superpower, the United States, and its friends and allies.
“Xi Jinping has his work cut out for him at the General Assembly,” said Mike Mazza, a China analyst at the American Enterprise Institute in Washington. He pointed to tensions with Europe over trade and investment, climate and human rights, in addition to the Trump administration’s more consistently confrontational approach to China.
Xi has failed to leverage ill feelings between many European leaders and Trump, while a potential detente with Japan has stalled. MDT/AP