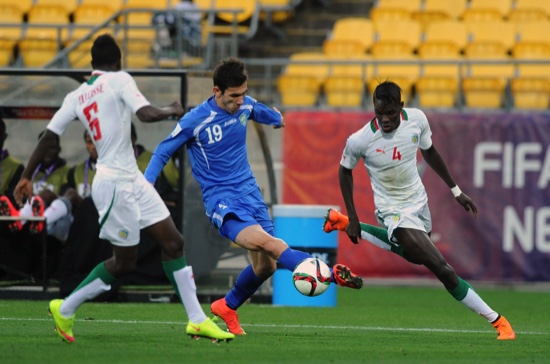 African countries captured two semifinal places at the Under-20 World Cup yesterday as Mali and Senegal kept up their surprising run in the tournament.
Mali pulled off its biggest upset yet by beating European champion Germany 4-3 on penalties while Senegal beat Uzbekistan 1-0 for the only regulation-time win in yesterday’s quarterfinals, three of which were decided in shootouts.
Serbia and the United States traded 18 penalties before Serbia emerged 6-5 winner of a match which had been locked 0-0 after extra time.
And five-time champion Brazil was taken to penalties for the second match in a row before beating Portugal 3-1 following another 0-0 draw. Serbia will play Mali and Brazil will play Senegal in Wednesday’s semifinals.
Brazil is the last of football’s superpowers remaining in the tournament. South American champion Argentina failed to progress from group play along with Central America’s champion Mexico. Former champion Ghana and front-runner Nigeria both fell in the round of 16, which also claimed 2013 finalist Uruguay.
While Brazil and Serbia qualified for the last 16 at the top of their groups, Mali and Senegal needed tiebreakers after both won one and drew one of their three group matches.
Brazil has found goal-scoring increasingly difficult as the tournament has progressed but has been efficient in shootouts. Brazil looked tired after being taken to penalties by Uruguay three days ago, and Portugal dominated much of the game but wasted a number of chances. In the shootout, Lucao missed the second penalty for Brazil but Raphael Guzzo, Andre Silva and Nuno Santos all missed for Portugal, allowing captain Danilo and Gabriel Jesus to send the Brazilians through.
“Everyone saw what happened but in the end we were able to celebrate in the penalty shootout,” Brazil coach Rogerio Micale said. “Portugal created more in front of goal than we did and deserved to win today.”
Portugal coach Helio Sousa was left to regret his team’s failure to “finish off everything we created.”
“We stamped our authority on the game, we were better in every area but we just couldn’t score,” he said.
Germany led 1-0 after the first half and also missed a penalty in regulation time before coming up short in the shootout. The penalty shootout was level at 3-3 when Mali baulked first with a miss. With the game there for the taking, two German players missed their shots and Mali progressed.
“We didn’t lose the match because of the opponent, we lost it because of penalties,” Germany coach Frank Wormuth said. “At the end it’s luck to win.”
Mamadou Thiam scored in the 76th minute to send first-time qualifiers Senegal to the last four. Uzbekistan had been kept in the match by goalkeeper Dilshod Khamraev, who pulled off a series of remarkable saves before Thiam’s combination with Remi Nassalan created the winning goal.
“We have prayed a lot since the beginning of the competition and particularly in the last few days,” Senegal coach Joseph Koto said. “Most importantly I want to congratulate my players because they truly played a heroic match today.”
Serbia advanced to their maiden World Cup semifinal after a marathon shootout against the U.S. The match needed 18 penalties to decide a victor.
Serbia held the Americans to just two shots on target in the game.
“Today we won an important game and defeated a very good team in the United States. I think it was a very even game for both teams,” Serbia coach Veljko Paunovic’s said. “In the end, I think we were lucky with the penalties.” Steve McMorran, Wellington, AP