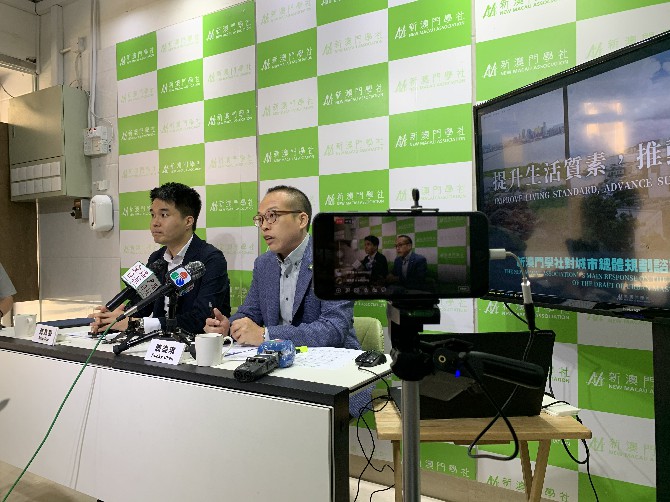 The New Macau Association (ANM) has called on the government to consider both the general and the regional population needs concerning the draft of the Urban Master Plan that was recently released.
In a press conference yesterday, the pro-democracy party lamented that the report took no account of the population projection data in the planning of public spaces and facilities.
“Urban planning and demographic policy are not separable. Without a long-term demographic policy, it would be impossible to [accurately] evaluate the urban capacity for the population,” said Sulu Sou, lawmaker and member of ANM.
The ANM is concerned that the crisis of over-population and the shortage of public spatial resources will continue, despite the increasing areas of land being reclaimed.
Sou also recalled that the government had stated that the problem of long-term rental of office space by governmental departments could be resolved after the completion of the new government office buildings in locations such as Pac On, Zona Nova and Dynasty Plaza.
Additionally, regarding public opinion on the use of Zones C and D around the Nam Van lake, nearly 70% opposed further governmental facilities being built there. Sou believes that, as the results call for, the area should be made available for public use.
“Together with the fact that there was no data provided by the government about the land required for governmental offices, any further [disregard for] public opinion would simply lead to the public impression of a [phony] consultation by the government,” Sou said yesterday.
From the perspective of the ANM, however, a good response by government would be to link up the Nam Van Zones C and D, the Nam Van lake, Sai Van lake and the New Urban Zone B, and make it an “open, sparse, publicly accessible, green, and a landmark for facilitating leisure, culture, innovation and sustainability.”
The height of buildings near the Colina da Penha should be restricted by law, the ANM added.
Meanwhile, the report shows that 100% of residents surveyed expressed opposition to the conversion of Alto de Coloane into a residential area, which the government had already acknowledged.
However, the ANM pointed out that the report did not address the public concern regarding the plan to convert the “white zones” to the southwest and southeast side of the Coloane hill into residential areas.
“These white zones have no planning or any kind of limitations and standards. We are worried that they will have housing projects [on them in the future],” said Sou.