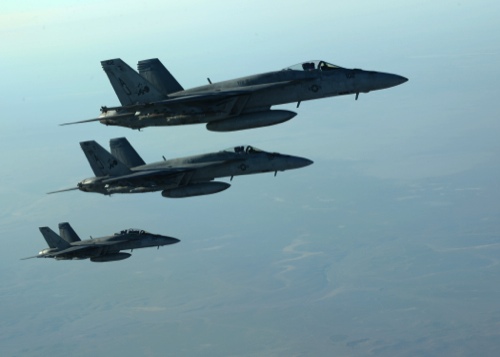 In this photo released by the U.S. Air Force, a formation of U.S. Navy F-18E Super Hornets leaves after receiving fuel from a KC-135 Stratotanker over northern Iraq, as part of U.S. led coalition airstrikes on the Islamic State group and other targets in Syria

U.S.-led airstrikes targeted Syrian oil installations held by the militant Islamic State group overnight and early yesterday, killing nearly 20 people as the militants released dozens of detainees in their de facto capital, fearing further raids, activists said.
The latest strikes came on the third day of a U.S.-led air campaign aimed at rolling back the Islamic State group in Syria, and appeared to be aimed at one of the militants’ main revenue streams. The U.S. has been conducting air raids against the group in neighboring Iraq for more than a month.
The Islamic State group is believed to control 11 oil fields in Iraq and Syria, and to earn more than USD3 million a day from oil smuggling, theft and extortion. Those funds have supported its rapid advance across much of Syria and Iraq, where it has carved out a self-styled caliphate straddling the border, imposed a harsh version of Islamic law and massacred its opponents.
At least four oil installations and three oil fields were hit around the town of Mayadeen in the eastern province of Deir el-Zour, according to the Britain-based Syrian Observatory for Human Rights and two local activist groups. A third activist group loyal to the militants confirmed the reports. It wasn’t immediately clear how important the refineries and fields were.
At least 14 militants were killed, said the Observatory, which gathers information from a network of activists on the ground. Another five people who lived near one of the refineries in the northeastern Hassakeh province were also killed, the Observatory said, adding that they were likely the wives and children of the militants.
Two activist collectives reported higher death tolls. Conflicting casualty figures are common in the chaotic aftermath of such events.
The planes came “with a terrifying sound and red lights before the explosions,” one activist wrote, documenting each explosion.
The militants meanwhile freed at least 150 people from a prison in their de facto capital of Raqqa in northeastern Syria, fearing more strikes, according to activists there.
Other strikes hit checkpoints, compounds, training grounds and vehicles of the Islamic State throughout the territory they hold along the Euphrates River in northern and eastern Syria, with strikes hitting near the Turkish and Iraqi borders. Diaa Hadid, Beirut, AP