US, Australia, N.Zealand team up to criticize China in Asia-Pacific 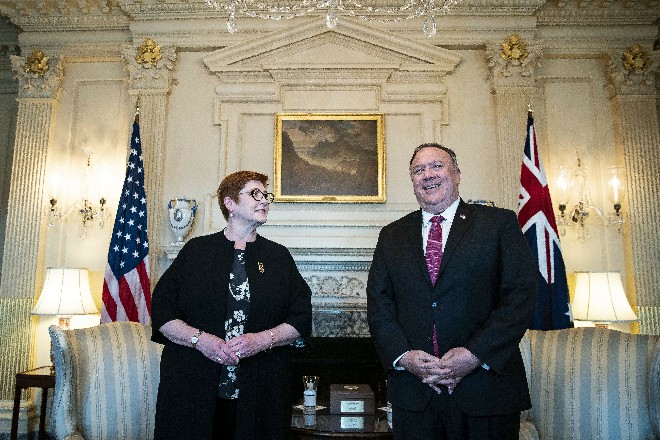 The United States and Australia are teaming up in their criticism of China, taking the country to task for aggressive behavior throughout the Asia-Pacific and not acting quickly to contain the coronavirus.
The U.S. and Australian foreign and defense ministers pledged yesterday [Macau time] to renew and strengthen a united front against China and what they termed Beijing’s malign behavior throughout the region and beyond that they said had grown worse in recent years.
The two sides — represented by Secretary of Mike Pompeo, Defense Secretary Mark Esper, Australian Foreign Minister Marise Payne and Defense Minister Linda Reynolds — accused China of violating international norms in the South China Sea and vowed to uphold freedom of navigation and the rule of the law as well as democratic freedoms in Hong Kong.
Pompeo said the U.S. and Australia face “immediate crises” that must be dealt with simultaneously. Those include COVID-19 and “Chinese communist party ambitions,” particularly its “malign activity in the Indo-Pacific region and indeed all around the world.”
Pompeo applauded Australia for suspending its extradition treaty with Hong Kong, something the Trump administration is also pursuing as China moves to impose curbs on dissent in the former British territory. He also slammed China for using pressure to stop Australia from taking such actions by targeting exports to the country.
Payne said Australia would work to hold all states accountable for violating the rule of law and would support allies in combating “China’s erosion of freedom in Hong Kong.” “We will step up and ensure that we support our mates,” she said.
Payne added that the U.S. and China would establish a working group to combat Chinese disinformation about COVID-19 and other issues.
Payne, Reynolds and their delegation met with Pompeo and Esper at the State Department despite concerns about the coronavirus. They will voluntarily self-quarantine on their return home to Australia.

US supports Japan
The United States supports Japan’s protests over Chinese ships venturing into the economic waters near disputed East China Sea islands, the commander of the U.S. Forces in Japan said yesterday.
“The United States is 100% absolutely steadfast in its commitment to help the government of Japan with the situation in Senkaku,” Lt. Gen. Kevin Schneider said of the group of islands, which are controlled by Japan.
China also claims the islands, which it calls Diaoyu.
“That’s 365 days a year, 24 hours a day, seven days a week. There is no deviation in that regard,” Schneider told reporters.
Japan has long protested the repeated presence of Chinese coast guard vessels in the waters. Schneider also noted such incursions had increased recently.
He called China the “No. 1 challenge” in regional security, although North Korea was the more “immediate threat,” given its weapons development.
Schneider said the U.S. was offering Japan surveillance information and other support, such as “reconnaissance capability,” which refers to monitoring the whereabouts of a potential enemy, to help Japan “assess the situation and to figure out exactly what’s going on in the water in and around the Senkaku.”
China shrugged off such concerns.
Wang Wenbin, spokesperson for the Chinese foreign ministry, reasserted China’s claim to the islands, stressing it was the country’s “inherent right to carry out patrol and law enforcement” activities in the area.

N.Zealand suspends treaty with HK
New Zealand announced earlier this week that it will follow the lead of its intelligence allies by suspending its extradition treaty with Hong Kong.
The move comes in response to China passing a sweeping new security law for the semi-autonomous territory.
New Zealand is the final member of the “Five Eyes” intelligence-sharing alliance to take such action after the U.S., Australia, Canada and Britain previously announced similar measures.
New Zealand relies on China as its largest trading partner and in the past has often tried to avoid direct political confrontation. China each year buys billions of dollars worth of New Zealand’s agricultural goods, including its lucrative milk powder, which is used in infant formula.
But Foreign Minister Winston Peters said the new law went against commitments China had made to the international community.
“New Zealand can no longer trust that Hong Kong’s criminal justice system is sufficiently independent from China,” he said.
Peters said there would be other changes to the relationship. New Zealand will now treat military and technology exports to Hong Kong in the same way as it treats such exports to China, he said. New Zealand also has updated its travel advice to warn its citizens about the risks they face under the new law.
Prime Minister Jacinda Ardern said New Zealand was following its principles.
“We do have a mature relationship with China,” Ardern said. “There have been occasions where we have taken different positions. This obviously will be one of them.” MDT/AP