US charges Turkish bank with evading sanctions against Iran 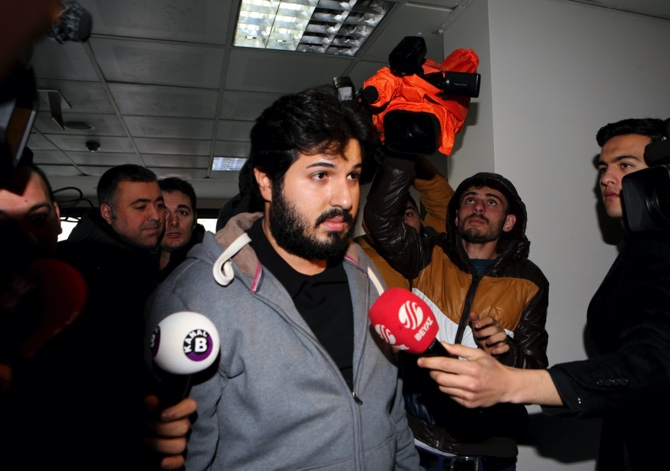 The charges against Halkbank, a state-owned bank, were announced Tuesday, years after a wealthy gold trader was arrested in Florida. Before pleading guilty and testifying against a co-defendant, the Turkish-Iranian businessman, Reza Zarrab, hired Rudy Giuliani to lobby the administration of President Donald Trump to drop the charges as part of a prisoner exchange.

The timing of the charges could be significant as the Trump administration tries to press Turkey to limit its military incursions in Syria, a move Trump himself allowed by declaring U.S. troops would be withdrawn.

The U.S. imposed limited sanctions on Turkey this week and has threatened more. While the charges against Halkbank are not related, they could give the U.S. leverage as Vice President Mike Pence, Secretary of State Mike Pompeo and national security adviser Robert O’Brien travel to Turkey on yesterday.

In a release, U.S. Attorney Geoffrey S. Berman said senior officials at Halkbank had designed and carried out the scheme to move billions of dollars of Iranian oil revenue illegally.

According to the indictment, Halkbank illegally moved about USD20 billion worth of otherwise restricted Iranian funds. It said the bank let Iranian oil and gas money be used to buy gold that was not exported to Iran and let transactions fraudulently designed to appear to be purchases of food and medicine by Iranian customers proceed, qualifying those funds for a “humanitarian exception” allowed under the sanctions.

Berman said the crimes were supported and protected by high-ranking Turkish government officials who received millions of dollars in bribes to promote and protect the scheme.

Assistant Attorney General for National Security John C. Demers called the crimes one of the most serious Iran sanctions violations his office has seen.

A representative of the bank could not immediately be reached for comment.

The indictment of the bank comes in a case that has resulted in charges against nine individuals, including bank employees, the former Turkish Minister of the Economy and other scheme participants. Seven of those individuals remain fugitives.

The charges bring fresh attention to the role Giuliani played in the case as he teamed with Michael B. Mukasey, a former attorney general in President George W. Bush’s administration, to meet with Trump administration officials and Turkey President Recep Tayyip Erdogan. The talks in 2017 failed to produce a deal.

Zarrab testified that he helped to orchestrate the deals with Iran, paying over $50 million in bribes to Turkey’s finance minister to advance the scheme. He said he believed Erdogan knew about the plot.

Prosecutors described it then as the largest sanctions-evasion prosecution on record, saying Atilla “massively undermined” U.S. efforts to choke off funding to Iran during negotiations to limit its nuclear program.

The case raised tensions between the U.S. and Turkey, where officials called it a charade aimed at discrediting Erdogan’s government. Erdogan labeled it an American conspiracy to “blackmail” and “blemish” his country.

A spokesman for Erdogan called Atilla’s conviction a “scandalous verdict.”

Atilla served over two years in prison and returned to Turkey in July after his release.

Sanctions against Iran have increased steadily in the decades after the Iranian hostage crisis in which 52 Americans were held captive from 1979 to 1981. The sanctions prohibit virtually all U.S. financial dealings with oil-rich Iran. Larry Neumeister, New York