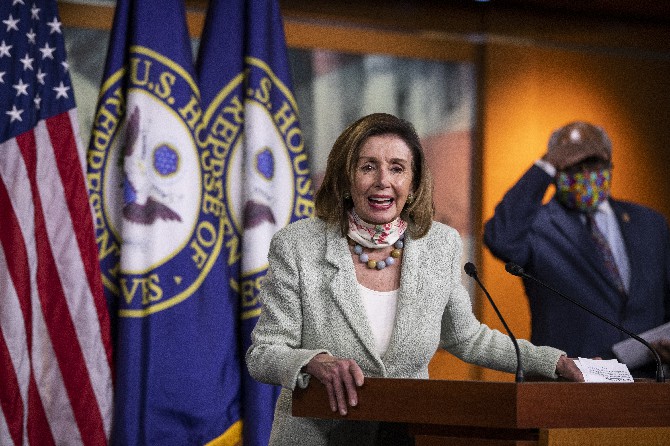 Congress voted yesterday [Macau time] to toughen the U.S. response to a brutal Chinese crackdown on ethnic minorities, adding another factor to the increasingly stormy relationship between the two countries.
The House passed a bipartisan bill that would impose sanctions on Chinese officials involved in the mass surveillance and detention of Uighurs and other ethnic groups in the western Xinjiang region, a campaign that has drawn muted international response because of China’s influence around the world.
The measure already passed the Senate and needs a signature from President Donald Trump, who said this week he’ll “very strongly” consider it amid U.S. anger over China’s handling of the coronavirus outbreak and tension over a Chinese plan to restrict civil liberties in Hong Kong.
Both issues emerged, along with other sore points in the China-U.S. relationship, as Republican and Democratic members of Congress spoke in support of the bill. No one spoke against it, and it passed by a 413-1 vote.
“Beijing’s barbarous actions targeting the Uighur people are an outrage to the collective conscience of the world,” House Speaker Nancy Pelosi said in a floor speech in support of the bill.
It was the first bill in history to pass with proxy votes after House Democrats, over Republican objections, adopted a measure allowing such votes in response to the coronavirus outbreak.
Congress late last year voted to condemn the crackdown in Xinjiang, where Chinese authorities have detained more than a million people — from mostly Muslim ethnic groups that include Uighurs, Kazakhs and Kyrgyz — in a vast network of detention centers.
This new legislation is intended to increase the pressure by imposing sanctions on specific Chinese officials, such as the Communist Party official who oversees government policy in Xinjiang.
The legislation also requires the U.S. government to report to Congress on violations of human rights in Xinjiang as well as China’s acquisition of technology used for mass detention and surveillance. It also provides for an assessment of the pervasive reports of harassment and threats of Uighurs and other Chinese nationals in the United States.
A provision that would have imposed export restrictions on surveillance and other equipment used in the crackdown was initially passed in the House but then stripped out in the version that passed in the Senate earlier this month.
Despite the limitations, the legislation amounts to the first concrete step by a government to penalize China over the treatment of the Uighurs since the existence of the mass internment camps became widely known in recent years, said Peter Irwin, a senior program officer at the Uighur Human Rights Project.
“It signals that a member of the international community is actually taking some steps to address the problem,” Irwin said. “The legislation itself has to spur the rest of the international community, particularly the European Union and other powerful blocs of states, to actually take this as a template and pass their own legislation.”
Rep. Michael McCaul, a Texas Republican and chairman of the House China Task Force, called what’s happening in Xinjiang a “cultural genocide” of Uighurs and other mostly Muslim ethnic groups.
The passage of the bill with strong bipartisan support would “show the Chinese Communist Party and the entire world that their treatment of the Muslim Uighurs is inexcusable and will not be allowed without serious consequences,” McCaul said. AP