US death toll from coronavirus surges past 100,000 people 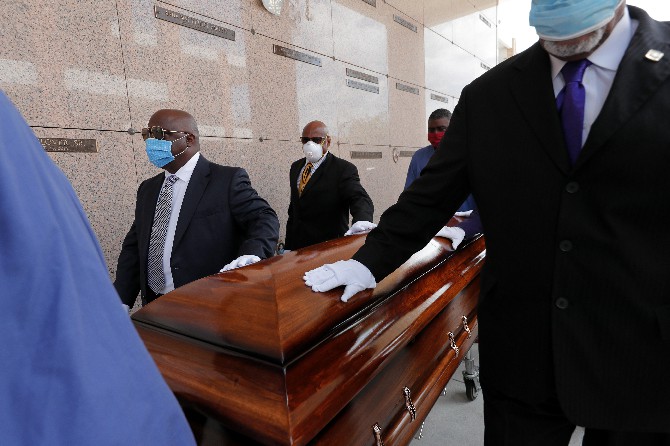 The U.S. surpassed a jarring milestone in the coronavirus pandemic: 100,000 deaths.
That number is the best estimate and most assuredly an undercount. But it represents the stark reality that more Americans have died from the virus than from the Vietnam and Korean wars combined.
“It’s a striking reminder of how dangerous this virus can be,” said Josh Michaud, associate director of global health policy with the Kaiser Family Foundation in Washington.
The once-unthinkable toll appears to be just the beginning of untold misery in the months ahead as Las Vegas casinos and Walt Disney World make plans to reopen, crowds of unmasked Americans swarm beaches and public health officials predict a resurgence by fall.
Dr. Anthony Fauci, the nation’s top infectious disease expert, issued a stern warning after watching video of Memorial Day crowds gathered at a pool party in Missouri.
“We have a situation in which you see that type of crowding with no mask and people interacting. That’s not prudent, and that’s inviting a situation that could get out of control,” he said during an interview yesterday [Macau time] on CNN. “Don’t start leapfrogging some of the recommendations in the guidelines because that’s really tempting fate and asking for trouble.”
Worldwide, the virus has infected more than 5.6 million people and killed over 350,000, with the U.S. having the most confirmed cases and deaths by far, according to a tally by Johns Hopkins University. Europe has recorded about 170,000 deaths, while the U.S. reached more than 100,000 in less than four months.
The true death toll from the virus, which emerged in China late last year and was first reported in the U.S. in January, is widely believed to be significantly higher, with experts saying many victims died of COVID-19 without ever being tested for it.
Critics have said deaths spiked because Trump was slow to respond, but he has contended on Twitter that it could have been 20 times higher without his actions. He has urged states to reopen their economies after months of stay-at-home restrictions.
Las Vegas casinos can welcome tourists again on June 4. SeaWorld and Walt Disney World plan to reopen to limited numbers of tourists in Orlando, Florida, in June and July. And people who have been cooped up indoors began venturing outside in droves, often without practicing social distancing or wearing masks.
Kelly Hove, 79, of Twin Falls, Idaho, an internationally known pianist, died at a nursing home on April 12 of complications from COVID-19 after a long battle with dementia. Her sister-in-law Jan Hove fears that more will die as states start lifting restrictions.
The virus exacted an especially vicious toll on Trump’s hometown of New York City and its surrounding suburbs, killing more than 21,000. At the peak, hundreds of people were dying per day in New York City, and hospitals, ambulances and first responders were inundated with patients.
There is no vaccine or treatment for COVID-19, though several emergency treatments are being used after showing some promise in preliminary testing.
Worldwide, about a dozen vaccine candidates are starting to be tested or getting close to it. Health officials have said studies of a potential vaccine might be done by late this year or early next year.
Only half of Americans said they would be willing to get vaccinated if scientists are successful in developing a vaccine, according to a poll released Wednesday from The Associated Press-NORC Center for Public Affairs Research.
Among the 100,000 fatalities was 74-year-old Michael Ganci of Newington, Connecticut, who died March 21. He was a public school teacher, a grandfather and father of four, and a 4th-degree belt Sensei in Kyokushin karate.
Ganci, who had a compromised immune system, died at a hospital in Hartford three days after showing symptoms. His family was not allowed to be with him and tried to text and talk with him on his cellphone during his final days. His wife of 48 years also tested positive for COVID-19 and had to grieve alone.
For their daughter, 45-year-old Joanna Ganci of Beverly, Massachusetts, the milestone is important to understand the scope of the virus.
“But at the same time, I think the danger of counting, the danger of statistics, is that it just minimizes the human element,” she said. “It’s like, what number is going to make an impact for people who haven’t been touched by it?”
It’s not even clear when the coronavirus turned deadly in the United States. Initially, it was believed the first U.S. deaths from the virus were in late February in a Seattle suburb. But by mid-April, it was determined that two people with the coronavirus died in California as many as three weeks earlier.
Comparing countries is tricky, given varying levels of testing and that some coronavirus deaths can be missed. According to figures tracked by Johns Hopkins University, the death rate per 100,000 people is lower in the U.S. than in Italy, France and Spain but higher than in Germany, China, South Korea, Singapore, Japan, New Zealand and Australia. CARLA K. JOHNSON, SUSAN HAIGH & LISA MARIE PANE, HARTFORD (Conn.), AP