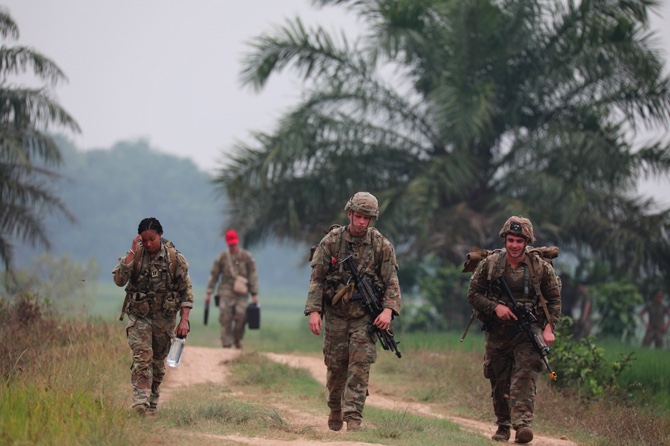 The United States and Indonesian militaries began annual joint combat exercises yesterday on Indonesia’s Sumatra island, joined for the first time by participants from other partner nations, signaling stronger ties amid growing maritime activity by China in the Indo-Pacific region.

More than 5,000 soldiers from the U.S., Indonesia, Australia, Japan and Singapore were participating in this year’s exercises, making them the largest since the drills were established in 2009. The exercises are designed to strengthen interoperability, capability, trust and cooperation in support of a free and open Indo-Pacific, the U.S. Embassy in Jakarta said in a statement.

“It’s a symbol of the U.S.-Indonesia bond and the growing relationship between land forces in this consequential region,” Gen. Charles Flynn, Commanding General of U.S. Army Pacific, said in the statement. “Because land forces are the glue that binds the region’s security architecture together.”

The planned two-week drills opened after China’s Defense Ministry said Tuesday night it would conduct a series of targeted military operations to “safeguard national sovereignty” in response to U.S. House Speaker Nancy Pelosi’s visit to self-governed Taiwan, which China claims as part of its territory to be annexed by force if necessary.

China has also been increasingly assertive over its claim to virtually the entire South China Sea.

U.S. Gen. Mark Milley, chairman of the Joint Chiefs of Staff, said the number of intercepts by Chinese aircraft and ships in the Pacific region with U.S. and other partner forces has increased significantly over the past five years, and the number of unsafe interactions has risen by similar proportions.

“The message is the Chinese military, in the air and at sea, have become significantly more and noticeably more aggressive in this particular region,” Milley said last month during a trip to the Indo-Pacific that included a stop in Indonesia.

Milley said Indonesia is strategically critical to the region and has long been a key U.S. partner. Earlier this year, the U.S approved a $13.9 billion sale of advanced fighter jets to Indonesia. And in Jakarta last December, Secretary of State Antony Blinken signed agreements for enhanced joint naval exercises between the U.S. and Indonesia.

While Indonesia and China enjoy generally positive ties, Jakarta has expressed concern about Chinese encroachment on its exclusive economic zone in the South China Sea, which China claims virtually in its entirety.

The U.S.-Indonesia military exercises coincided with Pelosi’s arrival in Taiwan late Tuesday, as the highest-ranking American official in 25 years to visit the self-ruled island. Beijing views visits by foreign government officials as recognition of the island’s sovereignty.

Japan’s Ground Self-Defense Force is participating for the first time in the exercises, saying it promotes a “free and open” Indo-Pacific vision of security and trade with the U.S. and other democracies in the region.

The expanded drills are seen by China as a threat. Chinese state media have accused the U.S. of building an Indo-Pacific alliance, similar to NATO, as a means to intentionally provoke conflict. NINIEK KARMINI, JAKARTA, MDT/AP