US | Trump administration defends its case against CNN’s Acosta 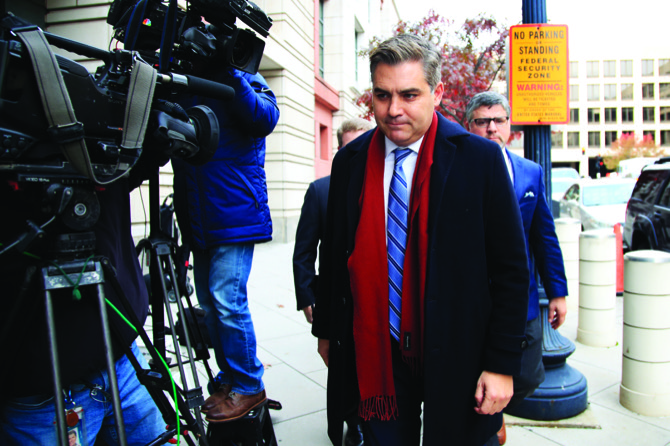 President Donald Trump’s administration is trying to fend off a legal challenge from CNN and other outlets over the revocation of journalist Jim Acosta’s White House press credentials.

Acosta has repeatedly clashed with Trump and press secretary Sarah Huckabee Sanders in briefings over the last two years. But the dynamic devolved into a near-shouting match during a combative press conference last week following midterm elections in which Republicans lost control of the House.

Acosta refused to give up a microphone when the president said he didn’t want to hear anything more from him. Trump called Acosta a “rude, terrible person.” The White House quickly announced that Acosta’s White House access would be revoked.

The CNN lawsuit calls the revocation “an unabashed attempt to censor the press and exclude reporters from the White House who challenge and dispute the President’s point of view.”

The Associated Press joined with a group of 12 other news organizations, including Fox News, in filing an amicus brief Wednesday in support of CNN.

“Secret Service passes for working White House journalists should never be weaponized,” said a statement by Fox News President Jay Wallace. “While we don’t condone the growing antagonistic tone by both the President and the press at recent media avails, we do support a free press, access and open exchanges for the American people.”

On Wednesday, Justice Department lawyer James Burnham argued that Acosta was guilty of “inappropriate grandstanding” and deserved to lose his access over “his refusal to comply with the general standards of a press conference.” Burnham also pointed out that CNN has dozens of other staffers with White House credentials, so excluding Acosta would not harm the network’s coverage.

The network’s lawyer, Theodore Boutrous, contended that Acosta was being singled out for his coverage of the White House, not his alleged rudeness during a press conference. “The White House has made very clear that they don’t like the content of the reporting by CNN and Jim Acosta,” Boutrous said. “Rudeness really is a code word for ‘I don’t like you being an aggressive reporter.'”

Prior to Wednesday’s hearing, the White House had maintained that it has “broad discretion” to regulate press access to the White House. Trump himself, in an interview published Wednesday, was uncertain how the court fight would end, saying: “We’ll see how the court rules. Is it freedom of the press when somebody comes in and starts screaming questions and won’t sit down?”

Trump told The Daily Caller that “guys like Acosta” were “bad for the country. […] He’s just an average guy who’s a grandstander who’s got the guts to stand up and shout.”

The White House’s explanations for why it seized Acosta’s credentials have shifted over the last week. Sanders initially explained the decision by accusing Acosta of making improper physical contact with the intern seeking to grab the microphone. But that rationale disappeared after witnesses backed Acosta’s account that he was just trying to keep the mic, and Sanders distributed a doctored video that made it appear Acosta was more aggressive than he actually was.