US | Trump delivers a slashing speech that rouses the right 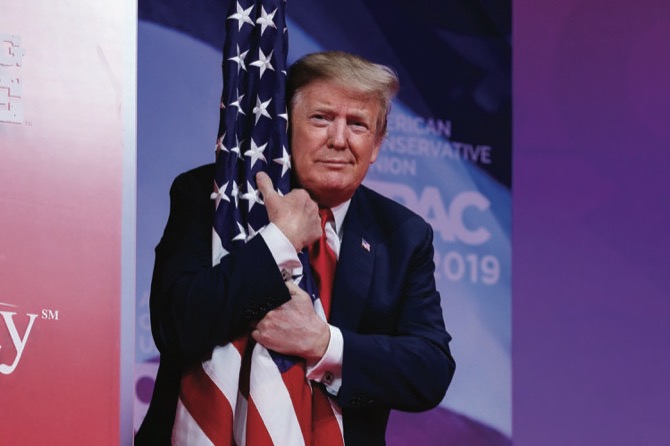 “America will never be a socialist country.”, President Donald Trump

In a slashing speech packed with braggadocio and grievance, President Donald Trump denounced Democrats as the party of “the socialist nightmare,” relitigated his crowd sizes back to the inauguration and took on “sick,” ‘’lunatic” and “dirty” foes at every turn, earning him the unvarnished adoration of cheering conservatives.

After a trying week of tumult and setbacks, Trump delivered a stemwinder Sunday [Macau time] that extended beyond two hours and hardly left him winded.

Trump let loose against House Democrats, who are broadening their investigations of him, predicted he would win re-election by a greater margin than his 2016 victory, taunted his potential White House challengers and sounded themes that are staples of his rallies. He complained often of getting “no credit” for his achievements as he proudly drifted “off script” at the Conservative Political Action Conference.

His remarks capped a week that saw his nuclear summit with North Korea’s leader collapse without an agreement, his former lawyer deliver damaging congressional testimony about his character and business practices and Congress take action to nullify his emergency declaration to secure money for the border wall that lawmakers have denied him.

On the stage, he was a prideful and at times profane figure as he complained that past political appointments had allowed a situation where political foes were trying to take him out with “bullshit.”

Trump reached back to old criticisms of his ex-attorney general, mocking Jeff Sessions’ Southern accent and calling him “weak and ineffective.”

It took him more than an hour to get to the message that Republicans and members of his administration have been emphasizing in recent weeks as they try to brand Democratic policy ideas as socialism.

For every prepared line like that, there were multiple improvisations from a president on policy and personality.

“That’s how I got elected — by being off script,” Trump said early in his speech as the crowd roared its approval.

He took particular delight in going after the Democrats’ Green New Deal, brought forward by some liberal Democrats in Congress and backed to varying degrees by several of the party’s 2020 presidential candidates.

“I think the New Green Deal or whatever the hell they call it — the Green New Deal — I encourage it,” Trump said mockingly as he wound up for a round of exaggeration. “I think it’s really something that they should promote. They should work hard on it. […] No planes, no energy. When the wind stops blowing that’s the end of your electric. Let’s hurry up. Darling, is the wind blowing today? I’d like to watch television, darling.”

He returned to the topic again and again, and jokingly kicked himself for doing so, saying it would give the Democrats time to back away from it. He also turned the topic into an attack of Sen. Elizabeth Warren, D-Mass., and one of the top Democratic contenders for president.

“I’m going to regret this. This speech should have been delivered one year from now, not now, damn it.” Trump said. “I should have saved the Pocahontas thing for another year because that destroyed her political career and now I won’t get a chance to run against her. I don’t want to knock out all of the good stuff and wind up with somebody who’s actually got talent.”

Trump also went after Federal Reserve Chairman Jerome Powell, essentially accusing him of being a drag on the economy.

Trump defended his declaration of a national emergency to obtain wall funding beyond the USD1.4 billion that Congress approved for border security.  He said the order doesn’t set a bad precedent for future administrations because Democrats are “going to do that anyway, folks. The best way to stop that is to make sure I win the election.”

Trump continued to bask in his 2016 victory and the crowds that attend his events. He talked of how few gave him a chance to win.

When he made his prediction of a second term, the crowd responded with chants of “USA, USA, USA.”

He also took a lengthy detour back to the inauguration, claiming that an enormous if not unprecedented crowd showed up, contrary to the thorough video and photo coverage that showed otherwise.

Trump revisited his meeting with North Korea leader Kim Jong Un, calling their summit “very productive.” He also took another crack at explaining his remarks that he didn’t believe Kim knew about or would have allowed the death of Otto Warmbier, the American college student who was held prisoner in North Korea, then sent home in a vegetative state. His remarks were widely criticized and led the Warmbier family to say they held Kim and his regime responsible for their son’s death.

“I’m in such a horrible position because in one way I have to negotiate. In the other way, I love Mr. and Mrs. Warmbier and I love Otto. And it’s a very, very delicate balance,” Trump said.

With special counsel Robert Mueller’s Russia investigation seemingly approaching its end, Trump spoke of the “collusion delusion” and lashed out at newly empowered House Democrats who are opening new inquires involving him.

House Democrats are undertaking several broad new investigations that reach far beyond Mueller’s focus on Russian interference in the 2016 election and possible collusion between Russians and the Trump campaign. So far, Mueller has not brought any public charges alleging a criminal conspiracy between the campaign and Russia; the investigation continues.

Their efforts increased this past week after Trump’s former personal lawyer, Michael Cohen, appeared before two House committees and a Senate committee. In his public testimony before the House Oversight and Reform Committee, Cohen called the president a “con man” and a “cheat” and gave Democrats several new leads for inquiry. Kevin Freking, Oxon Hill, AP