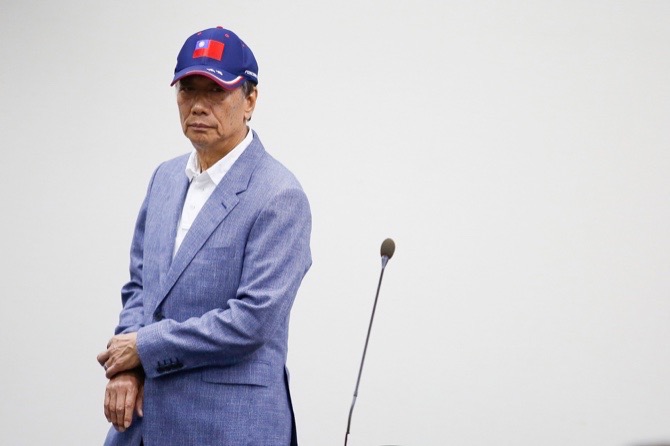 American naval vessels transited through the Taiwan Strait for the seventh time since July, highlighting the U.S.’s strategic rivalry with China as Taiwanese presidential hopeful and Foxconn founder Terry Gou called for the island to adopt high-tech defense mechanisms.

The destroyers USS Stethem and USS William P. Lawrence sailed through the waters Sunday and then yesterday, U.S. Seventh Fleet public affairs officer Clay Doss confirmed to Bloomberg News in an email. It was the seventh such trip reported since the U.S. Navy conducted a similar mission in July 2018, which was then first transit in a year.

“The ships’ transit through the Taiwan Strait demonstrates the U.S. commitment to a free and open Indo-Pacific,” Doss said. “The U.S. Navy will continue to fly, sail and operate anywhere international law allows.”

At an event last weekend, Gou said Taiwan should focus its military spending on areas including unmanned weapons, the Taipei Times reported. He added he had developed technologies like artificial intelligence applications and wireless networks, it said.

“We should increase ‘strategic and technical investments’ in the U.S. and other advanced countries, and bolster our own strategic and technical research and development capabilities with cutting-edge technology,” Gou wrote in a Facebook post. Taiwan should develop its thinking on asymmetric warfare, he added, and strengthen its defensive capabilities in order to avoid an arms race and uphold peace.

Gou’s comments shed light on the defense policies of the most prominent candidate for the opposition Kuomintang party’s presidential nomination, in a race that will determine whether Taiwan moves closer to China. The 2020 election will pit the KMT nominee against President Tsai Ing-wen, whose Democratic Progressive Party advocates a more decisive break from the mainland.

Tsai said yesterday Taiwan’s defense measures are primarily for self-defense and that it’s working to boost its manufacturing capabilities. “We are seeking arms procurement only when we cannot meet our demand with domestic production,” she said.

Gou “would agree with me that no country should use force to undermine peace,” she said. Chinese leader Xi Jinping “has not given up on use of force against Taiwan. Chairman Gou should have aimed his comments at China.”

Tsai said many countries were active in the strait, which she called “international waters,” and that Taiwan’s military had been monitoring those activities.

The latest U.S. passage through the strait comes ahead of Treasury Secretary Steven Mnuchin and Trade Representative Robert Lighthizer’s arrival in Beijing for trade talks yesterday, continuing a recent pattern under the Trump administration. All four visits by U.S. trade delegations since President Donald Trump and his Chinese counterpart declared their Dec. 1 tariff truce have been presaged by U.S. naval patrols through territory claimed by Beijing.

Chinese Foreign Ministry spokesman Geng Shuang said yesterday the country had expressed its concern to the U.S. side about the transit. “The Taiwan question is the most important and sensitive one in the China-U.S. relationship,” Geng told a regular briefing, urging Washington to “deal with Taiwan-related issues with caution, so that it does not negatively impact China-U.S. relations”

The U.S. has increased its naval transits through the 180-kilometer (110 mile) wide strait separating Taiwan from the Chinese mainland over the last year. Two American vessels mostly recently entered Taiwanese waters off the island’s southwest coast in late March.