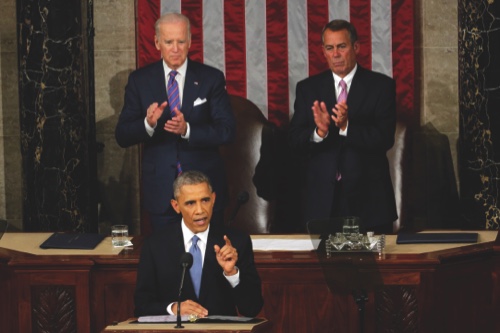 U.S. President Barack Obama declared the U.S. economy healed and said the nation now must begin work to close the gap between the well-off and the wanting.
“Tonight we turn the page,” Obama said in his sixth annual State of the Union address. “We have risen from recession freer to write our own future than any other nation on Earth.”
Obama didn’t give a listing of detailed policy proposals in his first speech to a Congress with both chambers controlled by Republicans. Instead, he outlined the rationale for an agenda that reflects a shift in the final two years of his presidency from spurring a tepid recovery to promoting a vision for reshaping the U.S. economy as it gains strength.
“It’s now up to us to choose who we want to be over the next 15 years, and for decades to come,” he said. “Will we accept an economy where only a few of us do spectacularly well? Or will we commit ourselves to an economy that generates rising incomes and chances for everyone who makes the effort?”
This year’s State of Union address is one of Obama’s final chances to make full use of the presidential bully pulpit to set the terms for the national debate before attention turns to the 2016 presidential election. It offers Obama a chance to reach beyond his presidency to shape campaign themes and possibly the governing agenda of a Democratic successor.
Even with his party’s losses in the congressional elections last November, Obama has maintained the initiative on national policy with a series of executive actions including an order protecting 5 million undocumented immigrants from deportation, an end to the half-century-old Cuba embargo and a climate deal with China.
While giving a nod to possible areas of compromise such as trade deals, the president made no effort to temper his aspirations to the political realities of Republican control of Congress. Nor did he signal any attempt to pull back from a collision course with Republican lawmakers on several issues, repeating his threats to veto any attempt to gut his signature health-care law or unravel Dodd-Frank financial regulations.
“The verdict is clear. Middle-class economics works,” he said. “We can’t put the security of families at risk by taking away their health insurance, or unraveling the new rules on Wall Street, or refighting past battles on immigration when we’ve got a system to fix.”
The headline elements of Obama’s proposals, such as free access to community college, higher taxes for the wealthiest Americans to fund tax credits for middle-income families and requiring employers to provide paid sick leave, hold little appeal for Republicans.
Obama delivered the speech amid signs that the strengthening recovery is giving him a boost with voters. An ABC News/Washington Post poll taken Jan 12-15 showed him at 50 percent approval, up from 41 percent a month earlier, though other polls haven’t shown as great a surge.
The economy’s performance in the past two quarters – an average of 4.8 percent growth – was the strongest in a decade. Private-sector employers added an average of 280,000 in each of the past three months, roughly double the monthly rate since the 2009 end of the recession. Consumer confidence in January reached an 11-year high.
Yet median household income fell 3.9 percent to USD51,939 in 2013 compared with 2009 when Obama took office, U.S. Census Bureau data show. The poorest fifth fared even worse, with incomes dropping 5.9 percent to $20,900.
In their response following Obama’s speech, Republicans will counter that government programs – especially Obama’s health initiative – aren’t the best way to lift the middle class.
“We see too many moms and dads put their own dreams on hold while growing more fearful about the kind of future they’ll be able to leave to their children,” Senator Joni Ernst, an Iowa Republican, will say in her response, according to excerpts House Republicans released. “Americans have been hurting, but when we demanded solutions, too often Washington responded with the same stale mindset that led to failed policies like Obamacare.”
Obama made only a glancing mention of one Republican priority and a source of friction between the White House and Congress, building the TransCanada Corp. Keystone XL pipeline. Obama has said he would veto legislation that would force approval of the $8 billion pipeline to carry oil from Alberta, Canada, through the U.S., bypassing an administration review.
The president indirectly referred to the project when he talked about the need to create jobs by improving U.S. infrastructure, saying, “Let’s set our sights higher than a single oil pipeline.”
As he has done throughout his presidency, Obama sought to engage private industry in advancing economic priorities. He mentioned companies including CVS Health Corp. and United Parcel Service Inc., lauding them for paying for education benefits, and Tesla Motors Inc. and Google Inc. for creating jobs of the future.
CVS Chief Executive Officer Larry Merlo was among the guests invited to join first lady Michelle Obama to view the speech at the U.S. Capitol.
Also sitting with her was Alan Gross, the American man who spent five years in a Cuban prison and was released as part of the deal to end the freeze between Washington and Havana. In a nod to the concerns of Cuban dissidents and pro-democracy advocates, Boehner’s guest was Jorge Luis García Pérez, who spent 17 years in a Cuban prison. His father was a well-known Cuban dissident who was killed in a car accident that his family believes was suspicious.
Obama appeared at ease throughout the address, adlibbing at times and responding to the audience reaction. As he neared the end of his speech, he declared, “I have no more campaigns to run.” As Republicans erupted in laughter, Obama retorted, “I know, because I won both of them. Mike Dorning and Angela Greiling Keane, ” Bloomberg/AP