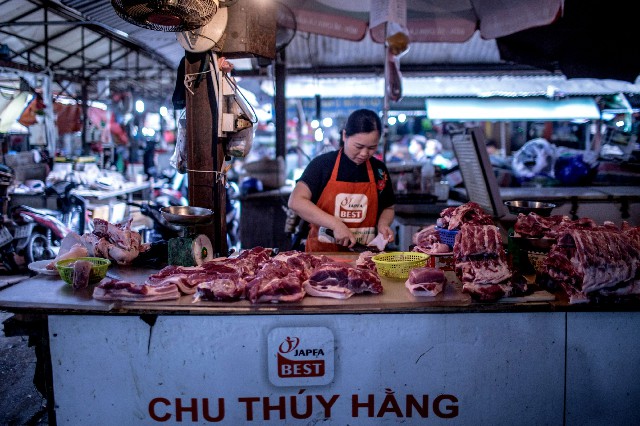 Vietnamese people may be at risk of missing out on their favorite local dishes this Lunar New Year, such as pork jelly and pork braised in coconut water with eggs, after a deadly hog virus slashed herds and caused nationwide shortages.
In an effort to keep the market supplied and to cool a surge in pork prices that’s pushing up inflation, the cabinet has ordered ministries to boost imports to satisfy demand over the peak new year period.
The market will probably have a shortage of 200,000 tons from this month through late January when New Year is celebrated, according to government estimates. Ministries have pledged to cooperate to enable companies to import whatever the nation needs from suppliers before the year-end holidays.
The shortfall means imports are poised to surge through the end of the year. Overseas purchases were only about 15,000 tons in the first nine months of 2019, according to the Thanh Nien newspaper, citing data from the agriculture ministry’s department of livestock production. Vietnam will be competing for global supplies with China, helping to sustain prices.
Still, there’s one potential snag. Imported meat is normally frozen, and that’s not to the liking of most of the country’s people.
“The taste of the Vietnamese is for freshly slaughtered pork,” said Nguyen Hong Minh, chief executive officer of Hong Linh Import Export Co. in Ho Chi Minh City. “Frozen, imported pork accounts for only 2% of consumption.”
The frozen pork imports may be destined for industrial kitchens, according to analysts at Hanoi-based VNDirect Securities Corp. If so, that would free up what’s available in terms of freshly slaughtered pork for direct consumption.
Further ahead, the impact of African swine fever probably won’t last long, said the analysts. Pork imports are forecast to return to a stable level of almost 1% of meat demand by late 2020 and to grow about 3-4% a year after that.
The current supply of pigs for slaughter mostly comes from major farms and companies as households in affected areas hardly have any pigs, according to the agriculture ministry. Live pig prices this month have risen to 80,000 dong per kilo, up almost 30% from a year earlier because of the shortage, said Nguyen Tat Thang, general secretary of the Vietnam Animal Husbandry Association.
African swine fever, which first hit the country in February, has caused the death and culling of 5.9 million pigs with a weight of 337,000 tons through the middle of this month. Total meat supplies are estimated to shrink by 4% to 5.14 million tons this year, according to the agriculture ministry. Pork output, which represents more than two thirds of protein consumption, is set to drop 10% from a year ago, or by 380,000 tons. Farmers are still wary of the risks of rebuilding herds at this time. Mai Ngoc Chau, Bloomberg