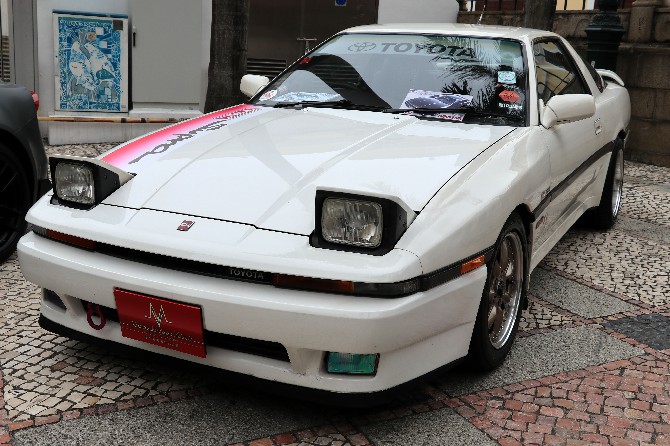 A vintage car show presenting several generations of the famous Celica and Supra car models from Japanese manufacturer Toyota enlivened St. Lazarus District area on Saturday afternoon.
The event, organized by St. Lazarus Church District Creative Industries Promotion Association (CIPA) and co-organized by Macau Vintage Vehicle Culture Association (MVV) counted the presence of many fans of both automobiles and vintage culture, with many getting to know what their favorite car models looked like in their parents’ or even grandparents’ times.
The event is included in a range of events hosted as part of the Ferreira de Almeida Festival 2020 and is also part of the Tour Macao Carnival, a series of events promoted and sponsored by the Macau Government Tourism Office aiming to enhance tourism attractiveness and aid the recovery of local tourism.
The show included the display of the famous Toyota coupé car model – Celica – from their first generation (which was issued in 1976) to the seventh generation (which was issued in 1999).
To the Times, the president of the MVV, Eddie Lam explained that the Celica has been very popular among car lovers in Macau.
Especially in the 1970s, the first generation of the Celica has won numerous awards and prizes, including at the Guia Race as part of the Macau Grand Prix.
“It was very difficult to create this event and to exhibit the full-range of the Celica models from the First to the Seventh generation in Macau. This was only possible because there are still car owners who are keeping and maintaining them in pristine condition to continue driving them,” Lam said.
Additionally, the event included three Supra model cars spanning three generations (1986, 1998, and 2020).
Lam spoke to the inclusion of the Supra by explaining that it is “another model created by Toyota based on Celica, which has more of a sports car flavor [increased performance]. The three generations exhibited this time are the same models that have been featured in TV dramas and movies,” Lam said.
“Here we have the third generation, featured in Hong Kong’s TV series “OCTB” in 2017, the fourth generation, presented in the Hollywood production Movie ‘The Fast and the Furious’ in 2001, and the latest fifth-generation GR Supra, [just arrived in Macau] which takes a role in the Hollywood movie ‘F9’ to be released in 2021.”
He added that in this event, people can realize all the changes made to the interior and exterior design of this sports car model over the past 34 years.
For Lam the event was well-received by the community and saw the presence of many participants especially between 2 p.m. and 5 p.m., he noted.
“Many [participants] were so surprised about the fact that there are this many Celicas in Macau still running and look[ing] just like new.”
According to the representative of the organizers, the event could have been even larger, if the venue allowed for it.
“If we had more space, we [could have] call[ed] out more Celicas and Supras. We have contacts of more owners that would [have been] interested in joining,” Lam reaffirmed, explaining that shows such as this often result in a “bait effect” with vintage car owners showing up to see it and showing interest in being part of an upcoming event with their cars.
On the topic, Lam said that the MVV is preparing an upcoming “Christmas-
themed” event that will take place at the Macau Tower from December 19 to 26.