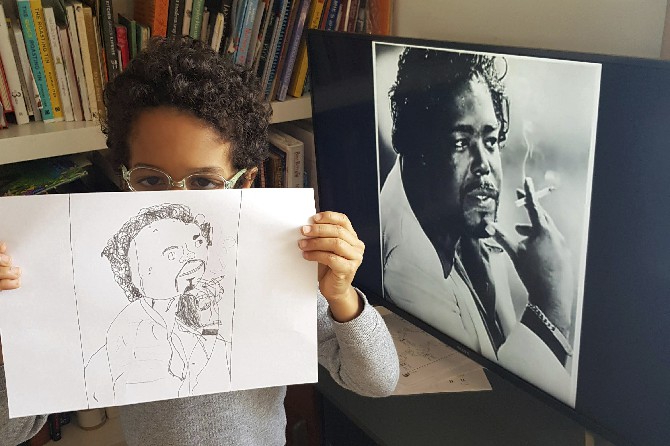 I cannot draw. I am unable to sketch anything past the outlines of a simple flower or a house no one would want to live in. For my verbally delayed autistic 6-year-old son though, drawing is a lifeline. It’s how he processes feelings and communicates when words literally fail him.
So despite being terrible at it, I often draw to explain complex situations such as why he, a highly sensory child, will have to stop touching his face and avoid others.
I sketch a menacing coronavirus, complete with spiky tops. He takes the pencil from my hands. Clusters of hearts now stand atop the spikes, turning my evil virus into a little bug who has friends. I smile, somewhat defeated, at the landscape of multiplied coronaviruses on the paper, now an army of love spreaders.
Autistics, they will have you believe, exist on the margin of emotions, in a world of their own, disconnected. “They’ve been preparing for lockdown all their lives,” someone jokes on social media.
My son is downstairs with his dad as I try to edit a news conference through my guilt and his explosive meltdown. It’s Week Two since lockdown began and his routine got upended. His emotions are very much not on the margin.
His disquiet wraps around ours like a Venn diagram. Lack of school is in some ways a welcome respite from the sensory overload of his everyday life. But there are also no more soothing swimming lessons, no more playground trips.
Parenting a special needs child has never been a walk in the park, but now we can’t even do that without hovering even more over our little human pinball, desperate to run, touch everything, say hi to all the living souls. For autistics, lockdown is not something they have been preparing for their whole lives. It’s a hell of crushed references. For parents, it’s like being the pinball machine itself, cushioning the frustration and also reveling in the emerging victories.
Homeschooling is a no-go. Attempts to turn cake-baking into a maths lesson are quickly deconstructed by a boy who sees more than he says. But he has new words and he’s asking questions.
I work. In the background I can hear him play Barry White, then the O’Jays. As I process my inability to homeschool, he processes the entire soul music catalog, drawing record covers and posing in front of the mirror. He wants to know what everyone is feeling, what they are looking at so longingly. I’m trying to breathe my way out of this pandemic and he’s having me wonder what a cigarette-holding Barry White is contemplating and where the O’Jays’ love train is going.
In between, he sketches a plane, his grandparents, the beach, a blistering sun. “This is for you to take to your work town,” he says. That’s the kitchen these days, so I pin the drawings to the fridge.
On Thursdays he goes outside and claps for carers, shouting louder than anyone else: “Come on, you can do it! Don’t be shy!” The neighbors across the street, people we barely know, laugh and wave; the social distancing that was there pre-pandemic is bridged by a child whose disability reveals itself in a different ability to connect.
Others will tell you autistics are locked in their own worlds, socially inept, indifferent. I will tell you about the bit where my son — not supposed to be able to read facial expressions — asks during a Zoom call if I’m OK when no one else across the screen can tell I’m not.
He taps into my anxiety, offering up hugs and drawings of where all the emotions live, where hope is stored, where coronaviruses have hearts and Barry White holds the key to the love train. Which, by the way, is headed toward the beach. JOANA MATEUS