Visit to Lisbon starts today | Xi: ‘China-Portugal relations are now stronger than ever before’ 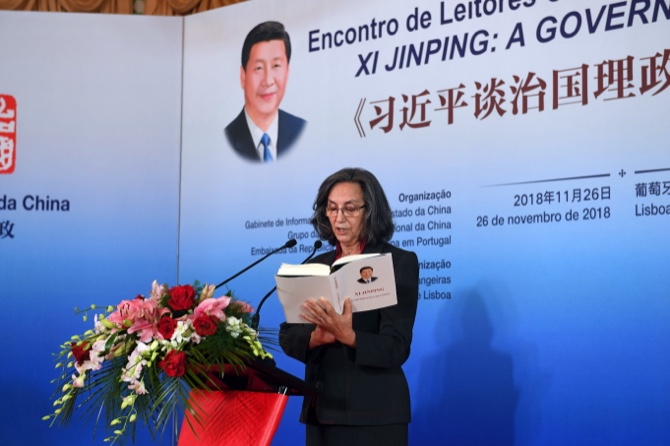 Ahead of Xi’s visit, Maria Teresa Cid, co-director of the Confucius Institute of University of Lisbon, speaks at the Sino-Portugal readers’ seminar on the book “Xi Jinping: The Governance of China” in Lisbon

Xi Jinping commences a two-day visit to Lisbon today. Ahead of his visit, a signed article by the Chinese President, titled “A Friendship across Time and Space, A Partnership for the Future” was published yesterday on Portuguese newspaper Diário de Notícias.

The article begins with a quote by poet Luís de Camões (“Here, where the land ends and the sea begins”), which, according to Xi, “vividly depicts the superb location of his motherland.”

“Twenty years ago, I made my first visit to Portugal, and in 2014 I had a stopover in the Terceira Island. I am delighted to be coming back to your country for a state visit at the invitation of President Marcelo Rebelo de Sousa,” Xi wrote.

The Chinese president mentions in the article that there is an “enduring friendship” between the two countries and recalls the Handover of Macau to China: “In 1999, through peaceful consultations, we properly resolved the question of Macau, an issue left over from the past, and ushered in a new era in the development of Macau, and in China-Portugal relations. In 2005, a comprehensive strategic partnership was established between our two countries. With frequent high-level exchanges, deepening political mutual trust, and fruitful outcomes in all areas, China-Portugal friendship and cooperation have embarked on a fast lane of development,” he wrote.

In the article, Xi lists some points of bilateral cooperation, expressing his wish that “Portugal will continue to play a positive role in the EU and contribute to the building of China-EU partnerships for peace, growth, reform and civilization.” One of those points is the role of Lisbon in the Belt and Road Initiative (BRI): “As Portugal lies at an important intersection of the land and maritime silk roads, our two countries are naturally positioned to cooperate under the BRI. We should seize the opportunities provided by the BRI to expand and strengthen cooperation on existing projects, make good use of the China International Import Expo and other platforms,” he wrote.

“China-Portugal relations are now stronger than ever before, and China-Portugal cooperation promises broad prospects,” the president concludes.