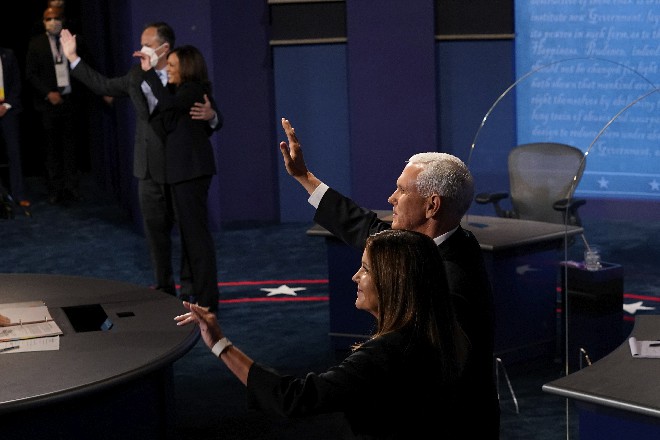 In normal times, vice presidential debates don’t matter much. But in an election year as wild as 2020, everything is magnified.
Vice President Mike Pence yesterday [Macau time] faced considerable pressure to boost coronavirus-stricken President Donald Trump’s flagging reelection hopes as he trails in national and battleground state polls.
California Sen. Kamala Harris stepped on stage having to balance her role as Joe Biden’s validator with her own historic presence as the first Black woman on a major party national ticket.
The candidates were separated by plexiglass out of concern for spread of the coronavirus from cases emanating from the White House.
Here are key early takeaways from the only vice presidential debate ahead of the Nov. 3 Election Day.

DEBATE, UNINTERRUPTED … MOSTLY
Millions of Americans were aghast when Trump derailed the first presidential debate with incessant interruptions and a cascade of falsehoods, while Biden answered by calling the Republican incumbent a “clown” who needed to “shut up.”
The opening of Wednesday’s undercard matchup made clear that Pence and Harris were set for a much different encounter — an actual debate.
To be sure, there were sharp moments, some modest interruptions and violations of the debate clock. But the dynamics represented a rare 2020 return to some semblance of normal presidential politics.
Pence’s even temperament has been a signature of his political career and he has often served as a kind of translator for Trump’s bombast. Harris had a long career as a prosecutor, comfortable arguing her case under pressure. Both played to type.
In tone and content, their debate was like an alternate universe from the one Americans saw little more than a week ago.

PANDEMIC, UNABATED
The Trump campaign wants voters to focus on anything but the pandemic that has killed more than 210,000 people across the country and infected at least 7.5 million more. But that subject dominated from the outset, with Trump and a growing list of White House aides, campaign staff and allies now sidelined with COVID-19.
Harris immediately put Pence on the defensive, calling Trump’s pandemic response “the greatest failure of any presidential administration in the history of our country.” Trump and Pence “still don’t have a plan,” she said.
Pence shot back that much of Biden’s proposed coronavirus response is action the federal government already is taking. More clearly than Trump perhaps ever has done, Pence expressed sympathy for all those affected by the pandemic, and he accused Harris of “playing politics with people’s lives.” Harris has accused Trump of politicizing the vaccine development process.
In fact, Biden’s plan does have elements that Trump’s doesn’t. Biden has called for the president to issue a mask mandate on federal property and has urged governors and mayors to do the same. He has called for using other federal spending and regulatory power. But Harris skipped those details.

RACIAL POLITICS
One spoke proudly of joining racial justice protests; the other denied the existence of systemic racism.
Harris, the first Black woman on a presidential ticket, spoke passionately about “people around our country of every race, of every age, of every gender” who “marched, shoulder to shoulder, arm and arm, fighting for us to finally achieve that ideal of equal justice under law.”
Still, she said, “We are never going to condone violence.”
Pence, in contrast, proclaimed his trust for the justice system and put the focus on incidents of violence, saying there was “no excuse for the rioting and looting.”
And he argued that the idea that “America’s systemically racist” and that law enforcement has an implicit bias against minorities “is a great insult to the men and women” who serve in law enforcement.

SUPREME COURT ARGUMENT
Perhaps Pence’s most aggressive line of attack on Harris was pressing her for an answer on whether a Biden administration would “pack” the Supreme Court by adding liberal justices if they win the election. Harris didn’t take the bait, just as Biden hasn’t in recent weeks.
Pence clearly sees the court vacancy as a winning issue for the Republican ticket. He hailed Trump nominee Amy Coney Barrett, who would succeed the late liberal Justice Ruth Bader Ginsburg if she’s confirmed, as expected, before the election. At least twice, he spoke directly to voters warning that Biden and Democrats would expand the court if they “don’t get their way” on blocking Barrett.
Harris seemingly missed an opportunity to remind Pence and the audience that the court’s Republican lean comes because the GOP-led Senate in 2016 refused to consider President Barack Obama’s nominee in the spring of 2016, carrying over a vacancy that Trump filled in 2017. She did, however, invoke Abraham Lincoln, who declined to make a Supreme Court nomination less than a month before his reelection.
The senator did manage to turn Pence’s “pack the court” attack around by noting that Trump’s slate of federal court appointees has been overwhelmingly white. And she underscored Democrats’ argument and public polling that suggests most voters think the Senate should wait until after the election to fill the current Supreme Court vacancy.

HANDLING HISTORY
Harris was cautious about approaching the historic nature of her candidacy. She referenced thinking about her mother, an immigrant from India, on the day Biden invited her to join the Democratic ticket. But she stuck mostly to the talking points that any potential Democratic candidate could have offered.
Pence, on the other hand, embraced the opportunity to be magnanimous. “I also want to congratulate you … on the historic nature of your nomination,” Pence told Harris. “I never expected to be on that stage four years ago so I know the feeling.”
It was a grace note from Pence, something not heard from his boss the week before.

MISSIONS ACCOMPLISHED
With the president’s poll numbers flagging since his manic debate performance and his infection with the coronavirus, Pence appeared to be on one mission: to stop the freefall.
Instead of speaking to on-the-fence independents or working to change the minds of undecided voters, Pence seemed intent on trying to keep the president’s base behind him.
Harris had a different burden because she is less well known. She introduced herself as credible and competent and likely assured Democratic voters that she is capable of stepping into the role of commander in chief if needed.
And she gamely defended Biden, another classic role for a vice president, broadly framing Trump’s tenure as a failure and Biden as suited to pick up the pieces. MDT/AP